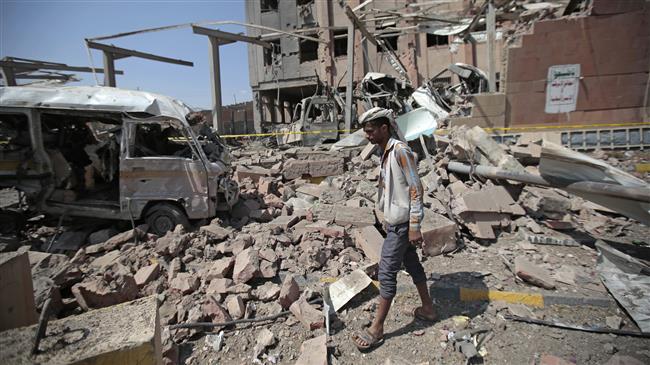 Security Council praise of Riyadh and its main ally, the United Arab Emirates (UAE), for pledging funds to ease a humanitarian crisis of their own making in the Arabian Peninsula state.

The Security Council is now considering the British proposal after Saudi Arabia and the UAE said they would deposit some $1 billion in Yemen’s Central Bank.

The statement “notes (the pledge) with appreciation.” It also voices concerns about civilian casualties, the biggest part of which has been caused by Saudi raids, as well as restrictions on commercial and humanitarian food, fuel and medical imports.

The proposal, however, coincides with fresh criticisms of the Saudi-led military campaign by UN experts and rights groups.

“The Security Council should be naming and shaming everyone,” said New York-based NGO Human Rights Watch’s UN Director, Louis Charbonneau. “A statement that condemns one side, the Houthis, but doesn’t even mention the abuses of the other, the Saudi-led coalition, simply nurtures the atmosphere of impunity,” he added.

Meanwhile, independent UN experts reported to the Council that a blockade by the invaders, which was tightened in November, “had the effect of using the threat of starvation as an instrument of war.”

The Saudi military campaign was launched in March 2015 with the aim of reinstalling Yemen’s former Riyadh-backed government and crushing the country’s Houthi Ansarullah movement, which has been both running state affairs and defending the nation against the aggression.

Around 13,600 Yemenis have so far lost their lives in the war.

The Saudi-led coalition has, since starting the war, been employing an all-out blockade of Yemen’s ports, saying it seeks to prevent transfers of weapons to Ansarullah. The siege has been depriving the Arab world’s already-most-impoverished nation of direly-needed foodstuff and medicine.

The UK, along with the US, has been providing the campaign with logistical support and generous arms sales.

The Campaign Against the Arms Trade says Britain’s export of bombs and missiles to Saudi Arabia has increased by nearly 500 percent since the start of the war on Yemen.

It has increased its weapons sales to the kingdom by around 500 percent since the onset of the invasion, The Independent reported last November.

The weapons sold by Britain include precision-guided bombs.

Last February, the Scottish Daily Record newspaper reported that evidence submitted during a legal case into British arms sales to Saudi Arabia had revealed that the UK trained the Saudi air force on how to use precision-guided Paveway IV bombs.