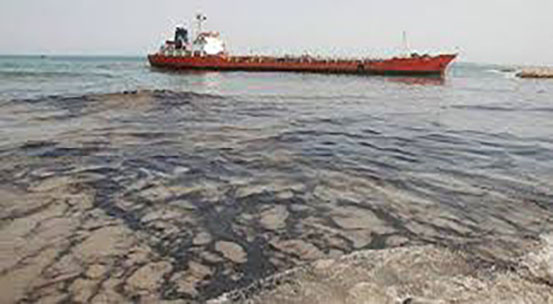 Al-Zubayri said in a statement that the coalition’s battleships are emptying their oils in Yemeni waters, consequently, they affect the fish significantly.

“I have visited Al-Khoba area in Hodeidah governorate, I was shocked by the appalling images of fishing mortality at great range, which also surprised the fishermen,” Minister of Fisheries said.

For his part, the Director-General of Marine Control at the Ministry of Fisheries Muhammed Al-Faqih declared that the coalition forces are sponsoring illegal fishing in Yemeni waters that do not observe international regulations.

“International regulations do not allow vessels to fish within 60 miles from the shore and 6 miles from the islands,” Al-Faqih said, stressing that exceeding the protected fishing vessels from the coalition of aggression for the legal distances for fishing causes the destruction of the marine environment, the impact of which will extend for decades.

Al-Faqih warned against the systematic destruction of the environment of the Yemeni islands, which was sponsored and tolerated by the countries of aggression, especially in Hanish archipelago, by removing the coral reefs that need 150 years to grow again.

He revealed the involvement of Emirati companies in uprooting and stealing coral reefs in Yemeni waters and transporting them to the UAE.

Al-Faqih noted that the ministry has detected major deaths incidents on the coasts of the Red Sea and the Arabian Sea, which indicate the use of prohibited weapons.

He confirmed that the ministry is constantly receiving reports of ships throwing chemical pollutants in the Red Sea under the glare of the coalition forces, which represent a threat to the health of the Yemeni and international consumers.

“We have received more than 12 reports in the Red Sea only about throwing chemical pollutant ships, and these reports do not reflect the total reality except by 10%,” he said.

For his part, Director of Naval Oversight Operations at the Ministry of Fisheries Yahya Awadah confirmed that electronic marine surveillance and communications have been suspended since the beginning of the war waged by the coalition forces on Yemen and that the ministry is receiving the reports from fishermen by phone.