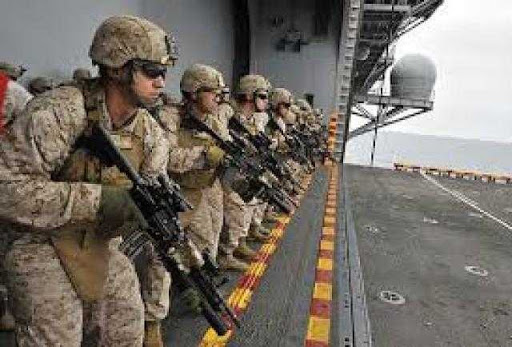 Is the American Presence in Southern Yemeni Provinces Fighting Terrorism or Repositioning Its Forces?

After the Saudi-led coalition announced on the 3rd of this March thwarting what it called “a terrorist operation to blow up an oil ship in the Arabian Sea”, the American battleships began moving towards the Arabian Sea to empty military cargo in the coasts of southern provinces of Yemen.

After landing 110 Marines with all their equipment in Belhaf Port in Shabwa Governorate last Saturday, local sources in the city of Aden confirmed yesterday, Tuesday, the arrival of 450 American soldiers to the port of Aden. The soldiers are reported to be sent in preparation for the deployment at the military base of Anad. Meanwhile, a number of soldiers landed on Socotra Island.

Such American movement coincided with joint exercises between the Emirati forces and the American forces that arrived this week to the eastern coasts of Yemen, specifically to the port of Balhaf in Shabwa and Socotra.

Observers believe that Washington is the one behind the oil tanker bombing in the Arabian Sea as it is the only side benefiting from the incident in order to justify its presence in the Arabian Sea. Observers also think that the US is using the terrorist attack to deploy its forces in the southern and eastern Yemeni provinces under the pretext of “fighting terrorist organizations.”

The existence of these groups in Washington’s point of view “has become a strategic threat to global energy security and global trade routes in a way that necessitates the presence of American forces to combat these terrorist organizations.” This is exactly what took place after the announcement of the attack. America is now sending its forces towards the Arabian Sea and the eastern Yemeni coasts on the Arabian Sea.

The American forces seek to construct military bases in the Arabian Sea similar to the bases they built in the Red Sea, including the American base on Mayon Island. The base was established on Mayon Island to impose more restrictions on the passage of oil tankers and international trade at Bab al-Mandab strait, which is the second most important sea lane in the world.

According to observers, these bases awaiting to be established will need funding. This is why the Americans are seeking to control the southern Yemeni provinces, in order to use their oil wealth to finance these bases.

After Five Years of War, How Will Yemen Face Corona?