Yemenis must have found gap in Saudi-led coalition’s defenses

Saudi-led coalition,backed by the US, launched its war against Yemen four years ago to impose its dictates on the unarmed people of Yemen. The war was not limited to the military side, but extended to the aspects of people’s life and the economic sector as well. The forces of coalition are used to bomb Yemeni cities and governorates with the most sophisticated Western weapons in a desperate attempt to change the balance of power in Yemen in favor of its pro-aggression government, headed by AbduRabbo Hadi.

A survey, conducted by the Ministry of Public Health and Population, at the end of 2018 for hospitals, health centers and units in Yemen, revealed that between 92 and 95% of the devices in hospitals have been disrupted.

In a statement issued, according to the Ministry of Health on Saturday, the Ministry has prepared a plan for the requirement of medical devices, equipment and essential medicines to enable the health sector and provide minimum health services.

The statement added that’ “a copy of those needs has been submitted to international organizations, but to date there has been no real response from all of them despite many promises.

“The aerial bombing of the center, which is packed with trucks of food and various goods belonging to private sector traders from different provinces, clearly proves the aggressive efforts to destroy national economy of banks, companies and various factories and trade,” the Minister said in a statement to “Saba” agency.

The coalition forced foreign Oil and gas companies, which represents 70% of the state resources, to leave Yemen. The Oil sectors in Hadhramout, Shabwa and Mareb were ceased despite that Mareb was under the control of paid fighters at the beginning of the war. 2015 and 2016 recorded intensive airstrikes targeting economic facilities, bridges, factories and farms. The coalition targeted everything related to the the public and private Yemeni economy. It continues to disrupt the business market and force tens of thousands of workers in industrial and agricultural sectors towards unemployment.

The coalition expects predicted that this collapse will happen quickly, with the aim of weakening the de facto authority in Sana’a, indifferent to the consequences of this siege on the vast majority of the Yemeni people who fall below the poverty line and who are the only victims of this barbaric siege. They believe that the world will forgive them and will absolve Saudi Arabia of human responsibility, but history will not relieve anyone of its curse. The collapse of the economic situation in Yemen will be recorded without debate as the worst crime of collective punishment against an entire country committed by one party that everyone knows. And it’s happening under the nose of United Nations, Member States, all monetary and financial institutions and human rights organizations worldwide.

Economists, interested parties and observers of Yemen’s economic affairs confirm that there is too much negligence on the part of the international community towards the humanitarian disaster facing the Yemeni people, particularly after four years of war and the siege . Observers of the Yemeni cause indicate that the forces of coalition retaliate against the Yemeni people because they rejected the Saudi guardianship, although the Yemenis did not oppose the neighboring countries, but only demanded their right to the sovereignty of their country and to preserve their independence. 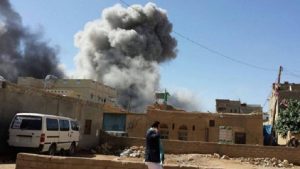 The Legal Center of Rights and Freedoms , for its part, revealed that the coalition aircrafts have destroyed 28,000 service and economic facilities in Yemen during the past four years.

According to international law relating to the maritime blockade of a State or territory, the measures taken by the forces of the coalition are in violation of international law. UN Security Council experts said in a report to the council that “the measures taken by Saudi Arabia and the coalition countries against the coast of Yemen have caused severe starvation and caused a significant shortage of essential goods and commodities, which in itself is a violation of international humanitarian law.”

For four years now, the Yemeni People have been steadfast in the worst military and economic war against one of the poorest countries in the world under the international silence and western slowdown. The coalition’s forces have not been able to break the will of this people despite the suffocating siege and the crimes they commit against it.