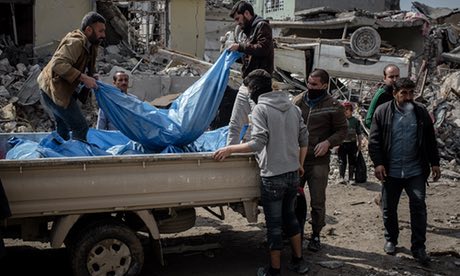 Mosul civilians were not told to escape before airstrikes that them

Civilians  in Mosul were told  not to get out from  their homes ahead of airstrikes last week that are reported to have killed over  than 150 civilians, Amnesty International has said.

The recent spike in civilian casualties suggests the US-led coalition in Iraq is not taking adequate precautions to prevent civilian deaths as it battles Isis alongside Iraqi ground forces, said  a report by the human rights group on Tuesday.

The coalition has acknowledged that the US military was behind an airstrike on 17 March that struck  a western Mosul neighbourhood. Civilians  have said at least 150 civilians were killed. US sources  have not confirmed that there were civilian casualties but have opened an investigation.

The battle for Mosul: a dirty war in Isis’s heartland – video

The Pentagon said on Monday it was reviewing more than 700 video feeds of coalition airstrikes on west Mosul. Amid rising concern over a jump in civilian casualties in fighting in Iraq and Syria, Colonel JT Thomas, a spokesman for the US central command, said it was putting a high priority on investigating the Mosul reports.

Donatella Rovera, senior crisis response adviser at Amnesty International, said: “The fact that Iraqi authorities repeatedly advised civilians to remain at home, instead of fleeing the area, indicates that coalition forces should have known that these strikes were likely to result in a significant numbers of civilian casualties.

Evidence gathered on the ground in Mosul “points to an alarming pattern of US-led coalition airstrikes which have destroyed whole houses with entire families inside”, the Amnesty report stated.

Iraqi forces began the assault on Isis-held Mosul in October after months of preparation and buildup. In January, Iraq declared east Mosul “fully liberated” and government forces are now battling to retake the city’s western half.

Civilians, humanitarian groups and monitoring officials have repeatedly warned of the possibility of increased civilian casualties in western Mosul due to the higher density of the population and the increased reliance on airstrikes and artillery. Faced with their toughest fight yet against Isis, Iraqi and coalition forces have increasingly turned to airstrikes and artillery to clear and hold territory in Mosul’s west.

In previous battles for Fallujah and Ramadi, those cities were entirely emptied of their civilian population as Iraqi forces battled Isis. In Mosul, the Iraqi government said it had asked civilians to remain in their homes to prevent large-scale displacement.

When the operation to retake Iraq’s second largest city was launched, more than a million people were estimated to still be living in Mosul. Today, the United Nations estimates about 400,000 remain trapped in what is now the last major Iraq stronghold for Isis.

Mosul’s children were shouting beneath the rubble. Nobody came

Amnesty International’s report quoted survivors and eyewitnesses of airstrikes that have killed civilians: “They did not try to flee as the battle got underway because they received repeated instructions from the Iraqi authorities to remain in their homes.”

On Monday, Iraqi forces said they had launched new assaults in Mosul’s Old City after the high civilian death toll appeared to prompt a change in tactics.

Thomas declined to discuss questions raised in the media on whether President Donald Trump’s administration had eased controls on coalition air strikes against jihadist groups in Syria and Iraq, possibly leading to the surge in civilian deaths.

But he called examining what happened in west Mosul “the priority at this time” for US central command, saying reports of a heavy civilian toll could represent several days of bombing.

“In Mosul, there are multiple days of strikes,” he told journalists in Washington in a Pentagon conference call. “The numbers of civilian casualties that have been reported variously – one of the things we’re looking at is if some of those numbers are cumulative from different incidents, different engagements, in this highly contested, very ferocious battle that’s going on in Mosul.

“We know that we were dropping bombs in the immediate vicinity,” he said, noting that the bombs used are “quite precise”.

US investigators are also looking at the apparent bombing of a school in Mansura near Raqqa, Syria on 21 March, and a building next to a mosque on 16 March in Al-Jineh, in Aleppo province.

The Syrian Observatory for Human Rights monitoring group said that 33 people were killed in the Mansura bombing and 49 in Al-Jineh, where the US target was a meeting of Al-Qaida officials.

Associated Press, Agence France-Presse and Reuters contributed to this report.