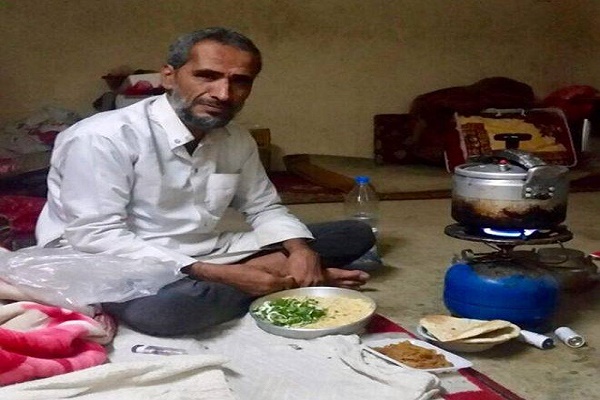 The Yemeni citizen Abdullah al-Ibbi:” I lost my family and all the meaning of happiness”

The war in Yemen had been going on for just two months when Abdullah al-Ibbi sat down for a late-night meal with his two wives, their children and grandchildren. It was then, in an instant, that his world shattered.

The air strike that hit Abdullah’s home killed 27 members of his family. He survived, but only learnt about their deaths six weeks later when he woke up in a hospital bed.
“If I didn’t fear Allah, I would have committed suicide at that moment,” he recalls. “I would have jumped off a building… but God gave me patience.”

The family had lived in Saada province south Yemen, which has come under intense aerial bombardment by the Saudi-led coalition supporting the fugitive President Abdrabbuh Mansour Hadi.

The air strike hit their home at around midnight, says Abdullah. Rescuers with bulldozers worked until morning to retrieve the bodies buried under the rubble. Seventeen were children – the youngest, Abdullah’s granddaughter, Inas, was one month old.

Since the war in Yemen began early last year, civilians have paid a heavy price, with thousands were  killed, the vast majority by Saudi-led air strikes alone, according to the UN. 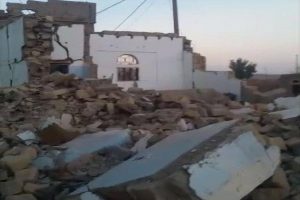 Abdullah spends most of his time alone now, in the room in a local mosque where he lives. He looks forward to visits from his sons, who live elsewhere in the city.

The nights are particularly difficult. Abdullah sustained injuries to his head, spine and jaw and needs treatment that is not available in Saada, but it is not just the physical pain that keeps him awake.

He is haunted by the memories of the life he had. “Sometimes I sleep two, three hours and then I wake up and stay up until morning… I remember my children and my home,” he says.

“Our lives were humble but it was a quiet life, a good life, we were happy… we lost everything.”

Abdullah had grown up in the central province of Ibb and later moved to Saada, opening two barber shops where he and his sons worked. “I struggled and worked over the years and built our home brick-by-brick,” he said.

In the 18 months since the tragedy, despite numerous interviews and visits from representatives of various organisations, Abdullah’s remaining family have received no financial support.

They have been left in debt, after they were forced to borrow money to pay for medical treatment for Abdullah’s son, Yunus.
Yunus spent six months in hospital, having suffered heavy shrapnel wounds and the loss of one eye.

“I want to give my sons their lives back. I want to see them settled in their own homes,” says Abdullah.

He is distraught as he names his youngest children – Ismail, Ibrahim, Ishaaq and Yaaqoub – who were always at his side.
But the recent birth of his grandson has brought Abdullah joy in the midst of his unfathomable loss.

His son, Ayman, has named his baby boy Ismail, in memory of his youngest brother, who was two years old when he was killed.

Abdullah describes seeing Ismail for the first time: “I felt like I’d been given the world… I felt that God had compensated us for what we’ve lost.”

He says his hope is that Ismail will not see what his family has witnessed. “I hope he doesn’t see this humiliation and war… I hope he has a better future.”

Conference in Britain in Solidarity With Yemen