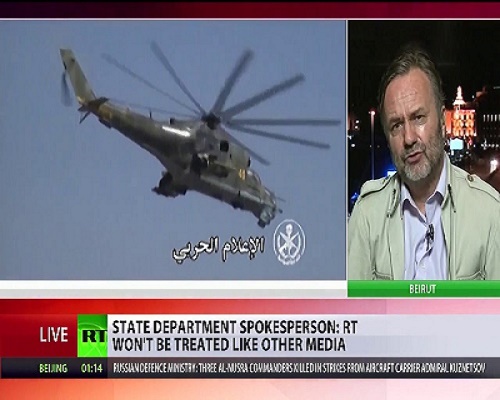 ‘Rank hypocrisy: Western media caught in its own echo chamber over Syria’

Last updated Apr 18, 2017
218
Share
YemenExtra
Martin Jay is an award winning British journalist now based in Beirut who works on a freelance basis for a number of respected British newspapers as well as previously Al Jazeera and Deutsche Welle TV. Before Lebanon, he has worked in Africa and Europe for CNN, Euronews, CNBC, BBC, Sunday Times and Reuters.

RT made an interview with him , we have chosen for Your Journalist 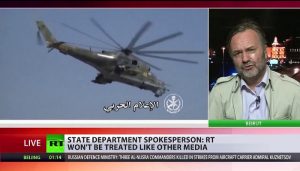 For the last six years Western media has indulged itself in reporting Syria, it has stigmatized the Assad government while the opposition is portrayed as more of less the victims, says Middle East expert and journalist Martin Jay.

A terrorist attack on buses used to evacuate some towns in Syria killed as many as 80 children on Saturday, has been widely condemned by humanitarian organizations. The UN has called for greater protection for children across the country.

A massive blast targeted civilians waiting to leave rebel-held areas as part of a deal struck between the government and opposition forces.

RT: The Western media seems to have a tendency to avoid blaming rebels in such incidents as Saturday’s attack. But when it comes to Assad, the media always tries to put the blame on the president even if there is no evidence. Why is that?

Martin Jay: Western media for the last six years has really indulged itself and got trapped in its own echo chamber in how it reports on Syria. It stigmatized the Assad government as being essentially the root cause of the problem and how it reports anything from the opposition side as largely more or less the victims, those fighters, whether they are extremists or not, are doing more or less a noble job. And this is what we are seeing here today. It is completely biased reporting of what is a tragic, heart-wrenching story. And I think we are stuck in that echo chamber. Nothing has really changed. If you look at how Western media reported on the Russian bombing in Aleppo and how it was so obsessed with reporting civilian casualties. But then it wasn’t quite so assiduous in its reporting on the US bombing in Mosul. You have a good example of rank hypocrisy, and this is what we are seeing.

RT: After the alleged chemical attack earlier this month, there was no investigation or evidence that Assad was behind it, but the US President took unilateral action against him. However, when as many as 80 children are killed in a suicide attack, we don’t hear from him. Why is that?

MJ: He doesn’t seem to follow the events very closely. I don’t think his people are bringing him up to speed. I think he is very selective in how he sees the Middle East and in particular Syria. It worries me how he very casually in interviews with American journalists confuses Syria and Iraq. I don’t think he gets all the picture. And I don’t think he wants all the picture. He has a very limited bandwidth on what he perceives to be important news and this hasn’t reached his radar screen. There has been a statement from Washington but it is such a cursory reference and hardly a really serious point of view at all from America…

RT: Are we going to see Western ambassadors bringing photos of children who died in Saturday’s attack to the UN Security Council like Nikki Haley did after the alleged chemical attack?

MJ: I can’t image it…I think a whole load of awkward and difficult questions have to be asked by journalists, by the White House, the Pentagon and Trump’s people which is what exactly is the relationship between the Trump administration and these opposition groups who are responsible for these massacres like Al-Nusra or others in that area. Those are the questions which journalists aren’t asking, and Trump isn’t prepared to answer…Every geopolitical expert or journalist in this part of the world knows perfectly well that Al-Nusra and other extremist groups are funded indirectly by the West via Qatar and Saudi Arabia. It is nothing new, we are not breaking news here…On the question of the photographs, I don’t think anyone is going to present them at any UN council.