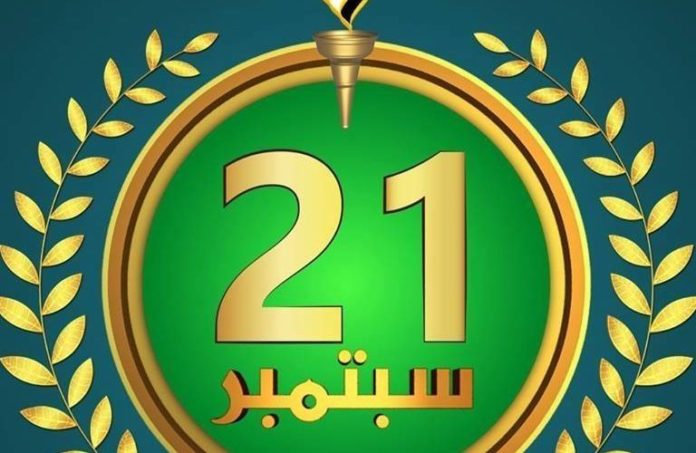 Prepartions for the Celebration of the Great September Revolution

Last updated Sep 20, 2017
208
Share
YemenExtra
Y.A
The preparatory committee for the celebration of the third anniversary of the glorious September 21st revolution in Sana’a held a meeting to debate the preparations for the effectiveness in various fields.

At the meeting, Mr. Safar al-Sufi, director of the office of Abdulmalik Badruddin al-Houthi, stressed the interest of the leader of the revolution as an affirmation of the unity of the people against the Saudi-led coalition and that it will prove that the priority of the people is to confront the coalition through serious and responsible action.

That the revolution when confronted with these threats effectively came aggression to stand up to, and still faces, the people are all free to circumvent their glorious revolution to save  them from all conspiracies woven by the enemies of the Yemeni people, calling for all to assume their responsibilities in the success of the third anniversary of the revolution, through the presence of a large and honorable public and the preparation of the largest convoys to support the fronts.

The members of the Preparatory Committee also spoke of aspects of preparation within their respective spheres of competence, affirming that 80 per cent of their assignments had been completed, leaving only some of the tasks to be completed according to the plan prepared during the two days preceding the event.

The participants also enriched the reports by debating and exchanging views and providing appropriate solutions that would pave the way for a mass participation that reflects the greatness of the Yemeni people and the will of their will in againt the coalition .

The participants then visited the celebration venue in the seventieth square in the capital Sana’a in order to inspect the works and follow them closely and ensure the readiness of the platforms and sound devices and all the requirements for the success of this anniversary appropeiatelty.

The Secretariat of the capital also witnessed meetings of the mobilization committees to mark the third anniversary of the September 21 revolution, specifically in the directorates of the revolution and the net and Bani Bahloul in the governorate.

The participants confirmrd that the commemoration of the September Revolution was a reflection of the broad aspirations of the Yemeni people and an explicit rejection of all forms of dependence and external guardianship, especially the guardianship of America and Saudi Arabia. The positions stressed the necessity of upholding the principles of the revolution until reaching all its objectives and realizing the aspirations of the people for this revolution. In the country.

In a related context, the residents of the Directorate of Rida in Amran governorate held a seminar in the presence of local authorities in the governorate and the Directorate in preparation for the commemoration of the third anniversary of the revolution of atheist of September.

The meeting was attended by dignitaries and dealers of the Directorate in the governorate, in which the attendees confirmed the importance of the 21st of September Revolution and the need to preserve it because it represents the aspirations of the simple Yemeni citizen in a safe and dignified life, stressing the universality of this revolution and its containment of all the spectrums of the Yemeni people because this revolution was launched by the will of all the free people of Yemen and its dignitaries.

In the preparations for the commemoration of the third anniversary of the revolution of September 21, a number of preparatory activities were held in Dhamar province. In Thamur Square, a popular stand was held in which participants emphasized their attendance at the central celebration in Sana’a to revive the revolution. In order to achieve equality, justice and exit from external tutelage.

In the same context, the health sector organized an awareness seminar under ,entitled “Revolution Continues in the Face of Aggression and Challenges” in which the words emphasized the great attendance and supervisor in the field of the seventy in Sana’a in order to convey a message to the coalition  and the world that the revolution is continuing and that the people sacrificing everything they have His freedom and dignity is an unbeatable and unbeatable people.

Saada province is witnessing extensive meetings in preparation for the celebration of the 21st and 26th September revolutions ,where the sons of Bani Mu’adh and Hamzat districts in the Directorate of Sohar held separate meetings with the participation of the local authority in the province, in the framework of mobilization and preparation for the occasion, and in the Directorate of Haidan a similar meeting was held in preparation for active participation in the upcoming revolutionary events.

Earlier, a meeting was held between the governorate’s undersecretary for service affairs, security leaders and the traffic police leadership, during which they debated security arrangements and safety systems in traffic and the importance of broad participation in celebrating the great revolution days.

In the same context, the directorates of Reda Al Sabaa in Al-Baida province organized a meeting on preparations for a decent and honorable attendance of the governorate on the third anniversary of the September 21 revolution in the seventeen square in Sana’a.

The words stressed that the people of the province and Yemen are demanding more than ever before to attend this event  and continue to support the fronts with money and weapons and the rejection of all forms of employment and the division of the Yemeni interior.

The meeting contained the reading of Al-Fatihah in a solidarity stand in tribute of the martyrs of the revolution.

Times : Arab Countries Secretly Agree with “Israel” to Support the Secession of Kurdistan