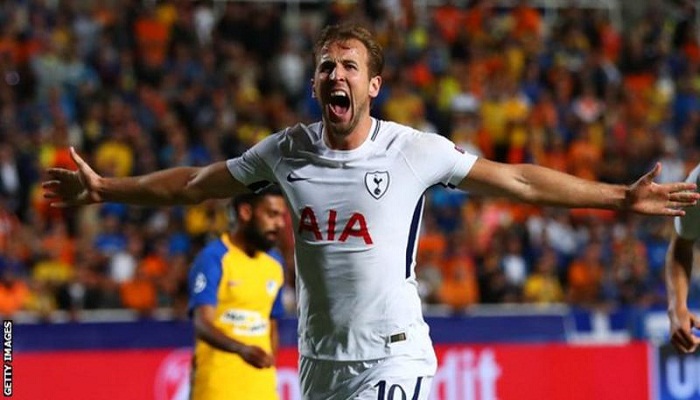 The England international, 24, has now scored six trebles in 2017 and 11 goals in seven games this month.

When Kane was asked about Hoddle’s comments, made on BT Sport, he said: “It’s great praise. I’ve just got to keep doing what I’m doing.”

Kane is 14th in Tottenham’s all-time list with 108 goals in 173 games, 158 behind the club’s record scorer Jimmy Greaves.

Jermain Defoe, Teddy Sheringham and Robbie Keane are all ahead of Kane, but he has passed the totals of other big names – such as former England striker Gary Lineker and German World Cup winner Jurgen Klinsmann.

Kane made his Tottenham debut in 2011 and has scored at least 20 goals in each of the past three Premier League seasons, including 29 goals in 30 games last term.

Spurs manager Mauricio Pochettino, who joked earlier this week that he was “in love” with Kane, said after Tuesday’s hat-trick that the striker has “unbelievable skills” in front of goal.

“He is something special – a killer. It is a special skill,” the Argentine added.

Saudi Crimes and Raids in September ,2017