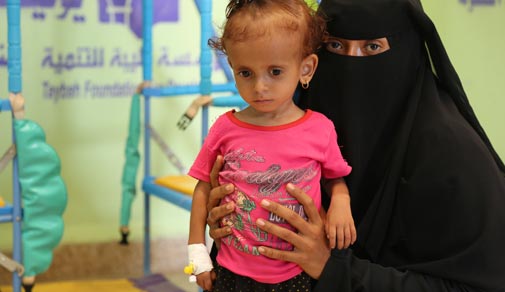 Tahani of Hodeidah, is one of 385,000 children suffering from severe acute malnutrition in Yemen. The living conditions of thousands of people have worsened due to coalition war on Yemen.

Khadiga shares that Tahani was born in 2015, a few months after the war in Yemen began. She is the youngest among three other siblings and they all live in extremely difficult conditions.

Hodeidah is one of the poorest governorates in Yemen. Majority of its residents work in trade, farming or fishing. The living conditions of thousands of people have especially worsened because of the conflict in Yemen. This includes Tahani and her family, who find it difficult to even two meals a day.

“My husband works in a construction site, farming or any work he may get. It has been difficult for him to find work. So he cannot provide food for us many of the times. We eat mostly eat just a meal a day,” Khadiga added.

The Therapeutic Feeding Center of Taibah; a local non-governmental organization, welcomed Tahani when she was two years old. She had lower Mid Upper Arm Circumference (MUAC) measurement to determine the level of malnutrition; she weighed only 6.3 kilos when she arrived at the center in September. Dr. Mahfouth Noman, who is taking care of Tahani, says that she weighed significantly less than mates for both her height and age.

“Due to severe acute malnutrition, Tahani feels weak all the time and cannot express joyfulness like other normal children,” says Dr. Noman. He adds that most children who come to the center for treatment, suffer from chest infections which worsen their health.

‘When the war stops, so will we’, say the Houthis