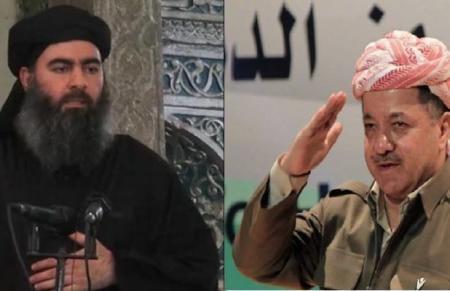 Iraqi army commanders say Kurdish Peshmerga forces have helped members of the Daesh Takfiri militant group and their families escape the town of Hawijah prior to its liberation by the Iraqi military earlier this month. Mahdi Taki, a commander with the Popular Mobilization Units (PMU), also known by its Arabic name Hashd al-Sha’abi, told the Middle East Eye (MEE) news portal on Monday that Daesh terrorists had bribed the Kurdish forces to secure their safe passage. Daesh elements “have escaped Hawijah via Peshmerga positions and [before the Hawijah battle began] the Peshmerga received 160 IS (Daesh) leaders,” he said.

“We are getting this information directly from our Peshmerga contacts. There are some bad Peshmerga who love money more than patriotism, and they are taking bribes from IS (Daesh),” he added. Iraqi Prime Minister Haider al-Abadi announced the liberation of Hawijah on October 5 following a two-week military campaign that involved the army, police, special forces units and the Hashd al-Sha’abi. The Peshmerga did not participate in that operation. Another Hashd al-Sha’abi commander, who was speaking on condition of anonymity, also confirmed the Daesh-Peshmerga ties, saying Takfiri terrorists have mainly fled to the Kurdish city of Erbil while their families have mostly been relocated in the city of Kirkuk.

“According to our intelligence sources, we estimate that in total 3,000 IS – including leaders, fighters and families have gone to the Peshmerga from Tal Afar, Hawijah and the surrounding areas,” he told the MEE. According to some Hashd al-Sha’abi units in and around Kirkuk, fleeing costs started from $1,000 for an ordinary Daesh militant and $2,000 for a family and rose up to $10,000 for a senior Daesh element.When the Takfiri terrorists arrived at a checkpoint near Dibis District, close to Kirkuk, they either handed the Kurdish forces a wad of cash or items of value, and were then allowed a safe passage to the Iraqi Kurdistan region. “This was a good chance for the Peshmerga because they have no money, and only limited weapons,” said an unidentified Iraqi army major.

Meanwhile, another commander with Hashd al-Sha’abi forces, Ali al-Heideri, stressed that the escape of Daesh militants from Hawijah was not a new thing, and that the relations between the two sides span over the past three and a half years. “And this is not the first time the Peshmerga have been together with IS. It was exactly the same with [the battle for the city of] Tal Afar,” he said.

Heideri further pointed out that the Kurdistan Regional Government (KRG) not only welcomed Daesh, but any terrorists in the region who were looking for refuge. Sheikh Kareem Harkani, also a commander of Hashd al-Sha’abi forces said, “It was the Peshmerga who gave IS to Iraq in the beginning, with most of them coming here from Turkey via Dohuk, so they’re leaving the same way they entered.” Peshmerga, Daesh collaborate in smuggling oil. Separately, Hawijah local councilor Nurhan Mizhir al-Assi said locals had information over the Daesh-Peshmerga cooperation in the illegal smuggling of Iraqi oil. “It was Kurdish oil trucks that came here under IS and drove the oil to Turkey. Civilians who stayed here told us exactly what was happening,” he said.

Updated Map of the Clashes in Northern Hama