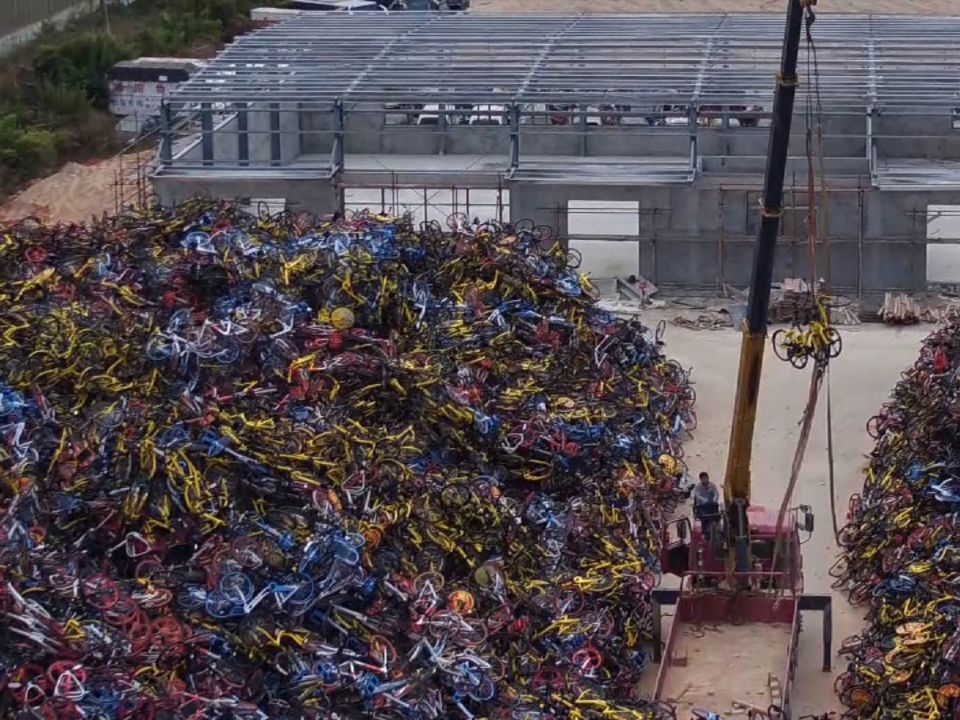 In China, rental bikes have become a social menace

Masses of dumped bikes are clogging up cities – making pavements impassable as well as blocking roads and cycle lanes.Beijing is on the front line of a battle that could be coming soon to a street near you.

Millions of dockless, shared bicycles have appeared in Chinese cities over the last two years, in what has variously been described as a green revolution and a social menace.

Unlike conventional schemes, where bikes have to be returned to specific locations, these are GPS enabled and unlocked using a smartphone app, so you can park them – within reason – where you like.

Depending on your perspective, this is either the best or the worst aspect of the system, with pavements becoming almost impassable at times for pedestrians in the capital, and bikes abandoned in cycle lanes.

The leading companies have teams out tackling the discarded bikes and systems of incentives and penalties are in place – but as they clear them away, more arrive.

“It’s hard,” one of the workers told us, as he heaved bikes onto the back of his flatbed tricycle. He said he had tried to tell people not to park the bikes in the wrong places, but they didn’t listen.

“This is uncivilised behaviour,” another man said, surveying a pile of bicycles.

“The bikes are public facilities, but people dump them down here and nobody takes care of them. I think it’s very bad.”

A young cyclist added: “It’s convenient, but sometimes there are too many bikes, they block the roads.”

Dockless shared bikes are already in more than 160 cities across the country and the market leaders have ambitions around the world, including the UK, where a number of small-scale schemes have sprung up, prompting their own local debate about the merits of the sharing economy.

In China, competition for market share is fierce, and regulation light, with companies rushing their brightly coloured bikes to prime commuting spots such as underground stations and office blocks.

Rides often discounted to the point of being free – or at most about 10p for a 30-minute ride.

According to the China Electronic Commerce Research Centre, more than 60 companies have started and collapsed in the last two years, in some instances taking users’ deposit money with them.

The country’s third-largest firm, Bluegogo, which had recently expanded to San Francisco, folded in November with its chief executive blaming “arrogance” and apologising for mistakes.

Despite raising billions of dollars in investment, the bike-sharing business model is still unclear, with speculation ranging from data collection to advertising and mobile payment platforms.

In places, the sheer volume of discarded bikes appears to be spiralling out of control.

In the southeastern coastal city of Xiamen, city authorities have picked up tens of thousands of what they say were illegally parked bikes.

The pile is now so large that cranes have to be used to reach the top.

The Urban Management Bureau told Sky News that so far none of the companies have come forward to retrieve their bikes.

They estimate there is now roughly one bike for every 10 people in the city.

Dr Wang Jiangyan, executive director of the China Sustainable Transportation Centre, and herself a shared-bike user, said more must be done to make the system work.

“The companies themselves, together with the government, should be able to do better analysis of the best locations for the bikes, better operation, and better transfer, so there are not too many of them on the street, and so they will be better used,” Dr Wang explained.

“The bikes themselves should be better maintained. If they’re really broken, the company needs to take them back to recycle them, and I think the government needs to make stricter regulations to help the companies make a good thing better.”