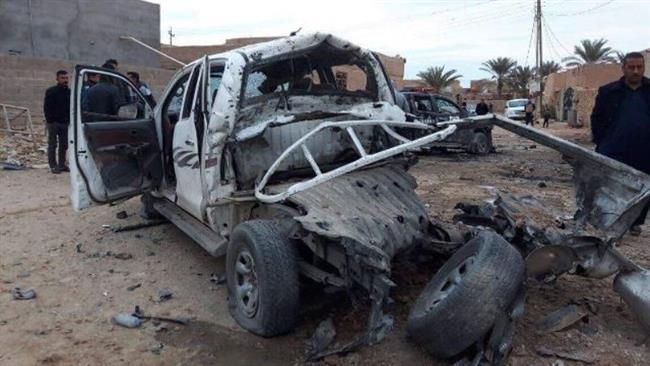 ovince, killing seven civilians and wounding 11 others, including a local official.

The attack occurred in the west of Ramadi, the provincial capital of Anbar, local Iraqi media reported on Saturday morning.

Iraqi Alsumaria television cited an unnamed security official as saying that the US helicopter gunship had targeted several civilian vehicles in the al-Baghdadi neighborhood of Ramadi.

Alsumaria said the head of the al-Baghdadi township and its police chief were among the wounded and were in serious condition.

It was not clear why the attack occurred. There was no immediate comment from the US military.

The US has been leading a coalition of its allies in a military campaign against purported Daesh targets in Iraq. While the Iraqi leadership officially announced the end of operations against Daesh in December last year, pockets of the terrorist group reportedly remain operative in rural areas in the country.

Daesh had overrun territory in Iraq and neighboring Syria in offensives that started in 2014.

The Takfiri terrorist group brutalized local populations in the territories it used to hold. It often mass murdered government employees and security forces as well as any civilians who rejected the group.

Just on Friday, Iraqi authorities found a mass grave in Iraq’s northern Kirkuk Province, containing the bodies of some 75 civilians and security personnel executed by Daesh.

Kirkuk’s Governor Rakan Said al-Juburi told AFP that residents and shepherds had guided security forces to the mass grave, found in Hawija, one of the last urban localities held by Daesh before it was defeated.