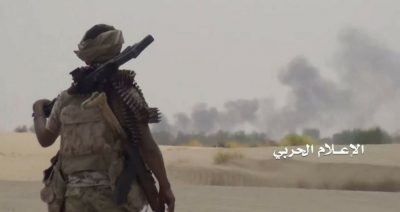 “This is not the first time that the ports have been closed…And every time they close the ports, the situation gets worse and food prices increase to the point where we can’t provide for our children,” explained Dr. Sherin Varkey, the Deputy Representative of United Nations Children’s Fund (UNICEF) in Yemen, to the BBC.

In Saudi’s ongoing military intervention in Yemen, Saudi-led blockades have strained access to basic resources like food, water so much that approximately 70 percent of the country is in serious need of humanitarian assistance.

The conflict in Yemen is largely seen as a proxy war between Saudi and Iran. Saudi leads an international coalition that backs the President, Abdrabbuh Mansur Hadi, whereas Iran backs the Houthi rebel movement.

Saudi Arabia is not alone in its military intervention, the U.S., U.K., France, Germany, and the UAE provide substantial arms and/or logistical support, enabling the oil-rich kingdom to continue its mission, including conducting massive air strikes which Human Rights Watch flag as war crimes.

In retaliation for a missile fired from rebel-held territory suspected to be modified by Iran, Saudi enforced a total blockade for all air and naval ports, preventing critical medical supplies and food from entering the country for a week.

Activists in the country are now reporting that a widespread famine with the potential to kill millions  is a distinct possibility.

According to Perry Cammack, a Fellow at the Carnegie Endowment for International Peace, there is little reason to hope the war in Yemen will end any time soon.

Saudi “lack[s] an exit strategy, which creates a dynamic of steady escalation, at the expense of the Yemeni population.” On top of that, “Yemen is far more important to Saudi Arabia than it is to Iran, so that such escalation has limited utility in pressuring Iran.”

In other words, Saudi is stuck in an expensive war that it doesn’t know how to win, and Yemen, according to Cammack sits on the verge of “becoming a humanitarian catastrophe.”

These are the five biggest contributors to Saudi’s war.