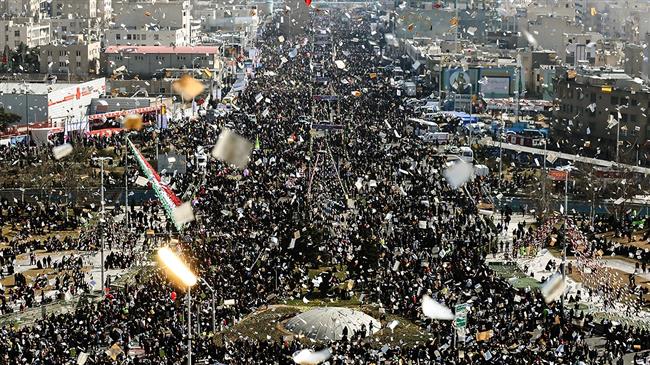 Millions of Iranians have taken to the streets nationwide to mark the 39th anniversary of the Islamic Revolution in a show of force, just weeks after scattered riots hit several cities and towns.

This year’s rallies came after US President Donald Trump cheered the rioters in a volley of tweets which angered many Iranians who view the American leader’s entreaties as “hypocritical” after he called Iran a “terrorist nation.”

The vehemence of slogans cried out by huge masses of protesters on Sunday sought to reflect that anger toward the US and its president who has banned Iranians from traveling to the United States and refused to properly refer to the Persian Gulf.

In the capital Tehran, hundreds of thousands of people and officials descended on the iconic Azadi Square, where Iran’s President Hassan Rouhani called for “a year of unity” in a speech broadcast across the country.

“I request that the 40th year of the revolution, the coming year, be the year of unity. I ask principles, reformists, moderates and all parties and all people to come and be together,” he said.

Rouhani said the Americans tried to interfere in Iran’s domestic affairs during the riots in late December and early January, but people thwarted their plot through unity and resistance.

The president also touched on the nuclear deal, saying the Americans have sought several times to kill the accord, but their efforts have failed so far.

Trump has set an ultimatum for mid-May, demanding that the US Congress and the Europeans change a 2016 nuclear deal with Iran or see him leave the agreement altogether.

Rouhani also hailed Iran’s achievements in countering terrorism in the region and its assistance to Iraq and Syria to foil a conspiracy by extra-regional enemies to partition the two Arab nations.

“In the past year, we scored a victory over terrorism and had many achievements in routing terrorists and Daesh in the region. Our assistance to the people of Iraq and Syria came to fruition and the regional nations were saved from the scourge of terrorism,” he said.

Rouhani said the enemies wanted to sink Lebanon into a prolonged turmoil and undermine Iraq’s unity, but to no avail.

“The Iraqi nation’s vigilance and the help of regional countries guaranteed the territorial integrity and national unity of our friendly countries in the region.”

Rouhani further underlined the need for political solutions to the regional crises and announced Iran’s readiness to cooperate with other countries on reinforcing stability and security in the region.

Each year on the 22nd of the month of Bahman on the Persian calendar, Iranians turn out to renew their allegiance to the Islamic establishment and Imam Khomeini, the late founder of the Islamic Republic.

People from all walks of life rally in different cities and towns across Iran each year to celebrate the nation’s victory that put an end to the monarchical rule of the US-backed Pahlavi regime.

On Sunday, some of Iran’s latest defense achievements were put on display in Azadi Square, including an anti-tank missile called Toofan M-2 which has a maximum range of 3,750 meters as well as two long-range Qadr ballistic missiles.

A total of 250 foreign reporters were covering the event, according to Ministry of Culture and Islamic Guidance officials.

Foreign Minister Mohammad Javad Zarif, who attended the rally in Tehran, said Iran owes its survival and security to the people and their presence at the scene.

Unlike some regional countries that are buying weapons from world powers, Iran’s existence and security is not tied to purchasing arms, he said. “Iran’s security is dependent on people’s presence at the scene.”

‘Era of hit and run is over’: Iranian official on Israeli strikes in Syria

Russian Plane with 71 People Onboard Crashes