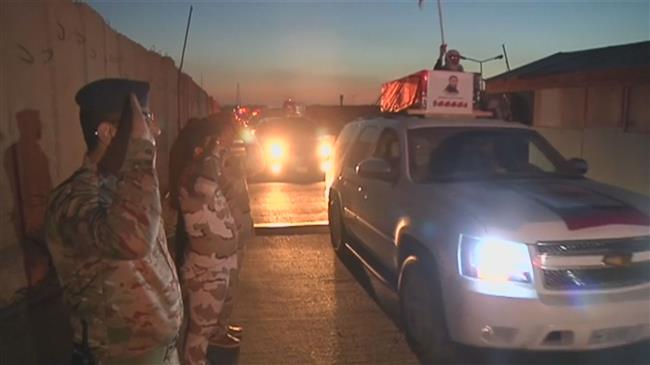 War against terror is not over, Iraqi PMU commander warns

A senior commander of Iraq’s Popular Mobilization Units (PMU) has vowed “revenge” after 27 members of its troops were killed in a Daesh ambush.

Hadi al-Ameri (seen below) made the remark on Monday at a military airfield in Baghdad where the bodies of the killed PMUs where being flown in, he further called on security forces to be vigilant, stressing that “the war against terrorism is not over yet.”

Late on Sunday, the PMU fighters, commonly known by the Arabic name Hashd al-Sha’abi, were killed when the remnants of the Daesh terrorist group staged an ambush on their convoy in the country’s oil-rich northern province of Kirkuk.

Hashd al-Sha’abi said in a statement that the attack took place in the al-Saadounya area, southwest of the provincial capital city of Kirkuk, when the voluntary forces were conducting overnight raids.

The assailants were disguised in army uniforms and pretended to man a fake checkpoint.

Brigadier General Yahya Rasool, an Iraqi military spokesman, announced that Daesh “sleeper cells” were behind the attack and that Iraqi troops are currently searching the area to locate the perpetrators.

Karim al-Nouri, a Hashd al-Sha’abi spokesman, described the attack as a “heinous crime,” and called for thorough scrutiny for those returning to their liberated areas.

Iraqi Prime Minister Haider al-Abadi’s office also released a statement offering condolences to family members of the victims. It also announced that orders to hunt down those responsible for the recent attack and other sleeper cells have been issued.

At least 11 of the troops killed in the ambush were from the southern city of Basra, where three days of mourning has been announced.

Meanwhile, a mass funeral has been held for those killed in the attack in the country’s southern city of Basra.

Hashd al-Sha’abi is an Iraqi state-sponsored umbrella organization composed of some 40 groups, which are mainly Shia Muslims. The force reportedly numbers more than 100,000 fighters. Iraqi authorities say there are between 25,000 and 30,000 Sunni tribal fighters within its ranks in addition to Kurdish Izadi and Christian units.

The fighters have played a major role in the liberation of Daesh-held areas to the south, northeast and north of the Iraqi capital Baghdad, ever since the terrorists launched an offensive in the country in June 2014.

Last November, the Iraqi Parliament approved a law giving full legal status to Hashd al-Sha’abi fighters. It recognized the PMU as part of the national armed forces, placed the volunteer fighters under the command of the prime minister, and granted them the right to receive salaries and pensions like the regular army and police forces.

On December 9, 2017, Abadi declared the end of military operations against the Daesh terrorist group in the Arab country.