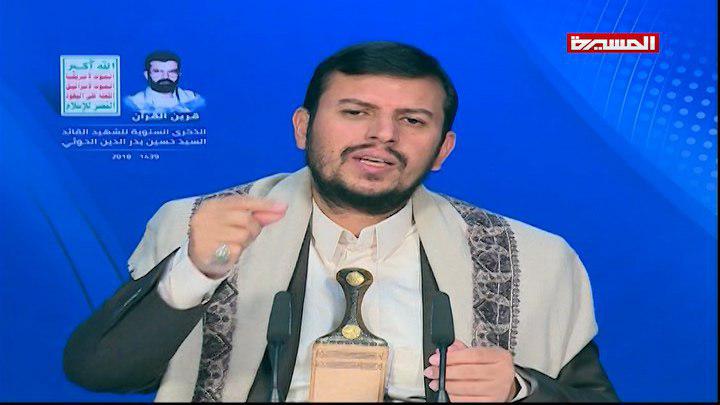 Saudis must be aware that Yemen’s military industry is evolving: Sayyed Houthi

The leader of the Yemeni revolution, Abdulmalik Badradean al-Houthi, explained that the military capabilities of the Yemeni Army and Ansarullah are evolving and that the Saudi regime and their allies should be aware of this escalation.

He pointed out that the more the Saudi regime and their allies continue with the war, the greater Yemen’s military capabilities shall be.

This came in his televised speech Friday on the anniversary of the martyrdom of Sayyed Hussein Badradean al-Houthi, who is the founder of the Ansarullah revolution in the country and happens to be the brother of Sayyed Abdulmalik Al-Houthi.

“Mr. Hussein’s project is not bounded by sectarian or geographical restrictions,” he said, adding that those who demand silence (instead of resistance) are attempting to make the nation reach the end point; where it no longer exists.

Sayyed Houthi noted that, “the enemy depends on the industry of pretexts as an essential means to strike the nation and that the events of September 11 were a pretext specially made for direct control of the region.”

He also stressed that, “the enemies used titles such as liberation, democracy, freedom and human rights to control the nation.”

Sayyed Houthi also added that the fight against terrorism was one of the most important headlines used by the Americans to carry out their colonial project. He further explained that the American government made and has been setting up the conditions in some countries to have thousands of elements from terrorist organizations grow bigger such as al-Qaeda, and that the organizations had the ability to expand only after certain conditions provided by the US.

The leader of the revolution also pointed out that America and its allies relies on exploiting problems among people, whatever size it is, to divide them and serve their colonial project. He also stated that there are groups working for America and Israel in all fields, whether it is military, security or culture.

He further accused the Arabs of making the region a plunder for the American and Israeli regimes without losing anything.

Sayyed Abdul-Malik Badradean al-Houthi pointed out that some Arabs provided services to Americans and Israelis who the latter did not even dream of them themselves, and that America adopted (penetrating the nation from within) as a strategy to push it into collapse.

Moreover, the leader of the revolution said that facts are now clearly manifested and that they must look at ways of confrontation. He also confirmed that the American official considers himself/herself as the first concerned with the Arab or Islamic issues, and that some are working to implant the state of despair and defeatism in the nation.

In addition, Sayyed Abdul-Malik Al-Houthi stressed that the situation in the areas under the occupation is calling for widespread popular action to stop the state of tampering exercised by Saudi-led coalition’s forces against Yemenis. He pointed out that the rape cases in the occupied territories have been frequently occurring.

He also said, “cases of rape and abuse are taking place in the occupied provinces, and those who did not rise and express outrage  have lost dignity and freedom.”

“The violation of our women’s dignity is neither easy nor simple,” he warned forces affiliated with the Saudi-led coalition.

The leader of the revolution also called to raise the state of readiness and intensify efforts in order to defend Yemen.

“We need to be more knowledgeable and steadfast and young men must take to battlefronts to confront the aggression,” he addressed his audience.