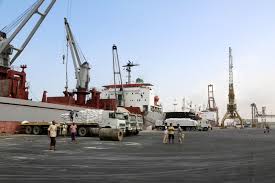 Hodeida Province Will be Given Priority in Development: President al-Mashat

President Mahdi al-Mashat on Tuesday said that the province of Hodeida will be given high priority in the development and infrastructure areas, Yemen Press Agency reported.

“We want it (Hodeida) to be a destination attracting investments in various fields as it is one of the promising provinces to support the national economy,” the president said during his meeting with Deputy Prime Minister and Minister of Finance Hussein Maqboli and Hodeida Governor Hassan Ahmed Haig.

In the meeting, the president directed the local authority to find alternative buildings for students of the medical colleges’ complex in the province, as well as supporting the Hygiene and Improvement Fund with necessary equipment.

It also touched upon plans and programs of the local authority and the development requirements.in the province.

Sayyed Nasrallah: Bin Salman ready to pay billions to another war in the Middle East