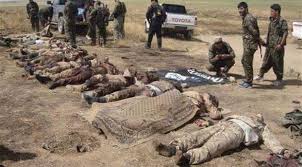 Dozens Bodies Of ISIS Taken Away In Iraq

The Iraqi civil defense forces declared that 640 bodies of ISIS militias were taken away including women and children over the last 48 hours, Commander of Iraqi civil defence forces emphasized.

Fahd Al-Aabid, the commander of civil defense forces said that retrieving teams took away several corpses of ISIS forces from under the rubbles of the battles in Al-Mausel city.