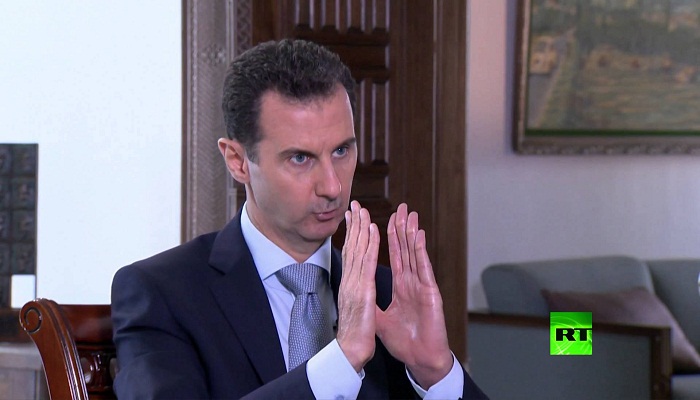 President Bashar Assad said that Washington and its “puppets” tried, and failed, to destroy Syria – and the US military will eventually be forced out of the country

President Bashar Assad was talking with RT`s interview.He commented on a range of topics, from the threat of direct conflict between the US and Russia, to why he doesn’t fear Israeli assassination threats

The Syrian leader said that whenever possible, his government has chosen negotiations and reconciliation over use of force

“War is the worst choice but sometimes you only have this choice,” Assad told RT. “Factions like Al-Qaeda, like ISIS, like Al-Nusra, and the like-minded groups, they’re not ready for any dialogue… So, the only option to deal with those factions is force

Meanwhile, Assad said that Washington is “losing its cards” and can be brought to the negotiating table, after having to switch its support between the various anti-government factions, and the recapture of the key cities of Aleppo and Deir ez-Zor by government forces over the past two years

The Syrian leader noted, however, that the closer the deadly conflict comes to an end, the more desperate his opponents’ measures become. He cited the alleged Douma chemical weapon attack (“Is it in our interest? Why, and why now?” he asked) as a last-ditch Western attempt to sway international opinion – one failed

London is an accomplice in the Saudi atrocities in Yemen.. what’s new this time