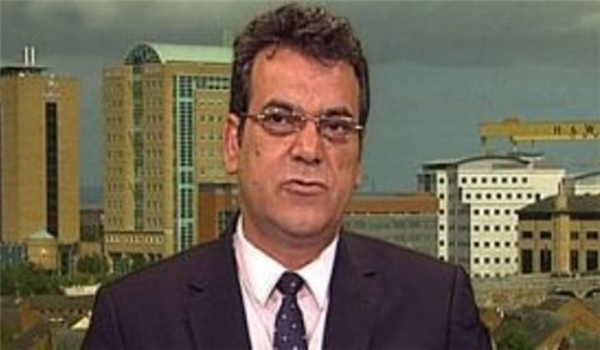 Political analyst Saeb Shaath says the Saudis turned to the Israeli military for help and the Zionists trained them with “their Nazi tactics” and deployed the Gaza scenario in major areas of Yemen.

Dr. Shaath, in a press interview with FNA, said that the Saudi forces, trained by the Israelis, deployed the Gaza scenario on Yemeni cities by imposing land, naval and air blockade aimed at collectively punishing the civilian population to steer their anger against the resistance forces, as the cause for their sufferings. And the scenario once failed in Gaza is now failing in Yemen.

Commenting on the British arms sale to Saudi Arabia, the analyst said that the British government considers the Saudi war on Yemen as an opportunity to make money and the poor Arab country a place to test its weapons.

Dr. Saeb Shaath is an author, a Middle East political expert and a former Palestinian diplomat. He is currently the chairman of Palestine Aid organization and the co-founder of Irish Map (Medical Aid for Palestine), said to be having an excellent impact on improving the Palestinian health facilities in Gaza.

Below you will find the full text of the interview.

Q: What do you think about the ongoing humanitarian crisis in Yemen caused by the Saudi war and the blockade on the country?

A: Since the Saudi coalition and its mercenaries do not have the expertise of conducting an urban warfare or asymmetric warfare; they resorted to extensive usage of air power, with intense attacks, targeting civilian infrastructure, hospitals, schools and residential areas. The air campaign designed to inflect the maximum destruction and to starve the entire people of Yemen into submission

The only fit description to the brutal war of aggression on Yemen is ‘genocide’. Today there are 20 million people in Yemen facing imminent starvation; due to the 3 and a half years long blockade and the military offensive by the USA, western backed Saudi-Emirati coalition on the port city of Hodeida; the entry point for 85-90 percent of all food and medical supplies into Yemen.

Q: What are the Saudis’ objectives in their war on Yemen?

A: The Saudi regime and its American masters are adamant in defeating the free independent and sovereign Yemen.

For many reasons: 1. To bring Yemen back to the Saudi’s sphere of domination. 2. To loot its many resources. 3. To impose de-develop on the country. 4, To annex Hadramawt to Al Saud’s kingdom, that’s because of its geopolitical importance which can reduce the strategic significance of the Strait of Hormuz, to the west and Saudis.

Moreover, the Al Saud and its western masters, do not want the people of Arabia specifically of the Eastern provinces, to deploy the Yamani’s tactics, to become sovereign over their country and its wealth, that scenario represents an immense blow to the western imperialists design for global domination. Losing the Saudi milking cow, which is essential with its strategic geopolitical importance, to the current American empire’s regional and global destabilizing strategy, it provided its effectiveness against the former Soviet Union, Naser’s Egypt, Iraq, Syria, Libya and Iran.

Q: It seems that the Saudis expected an easy-to-win combat when they first stepped into the war. What do you see as the reasons for Riyadh’s continued failure in Yemen?

A: The Saudi war of aggression on Yemen has failed to achieve its major goal, or to take control of major cities. The Saudis resorted to the Israeli military Generals and their Nazi tactics, as mercenaries, they trained the Saudi forces and deployed the Gaza scenario on major areas of Yemen, imposing land, naval and air blockade, engendering starvation, to achieve a slow genocide, while subjecting the Yeminis to collective punishment, aiming at steering people’s anger against the Houthis and the Yemeni army, as the instigators of their hardship, they failed to defeat the Gazans and are failing in Yemen.

Q: Why do the US and the UK continue to supply Saudi Arabia with arms despite international criticism with regard to civilian casualties?

A: Yemen is significant to the western imperialists’ desire for global domination. The British empire used to manage the logistics of its colonies from Australia to India from Eden in Yemen. It’s important for the British to help the Americans and Saudis in keeping Yemen impoverished and in turmoil that cannot exist without international handouts. For the British government and its military industry it’s a money-making war and a free ride to test its weapons in Yemen.

Q: Why have the international organizations, particularly the UN, remained passive in the face of the ongoing Saudi atrocities?

A: The Chinese and Russian position on the UN Security Council regarding Yemen is not even keeping

Of Coalition’s Accomplishes “Killing of Fishermen, Destroying their Property”: Report