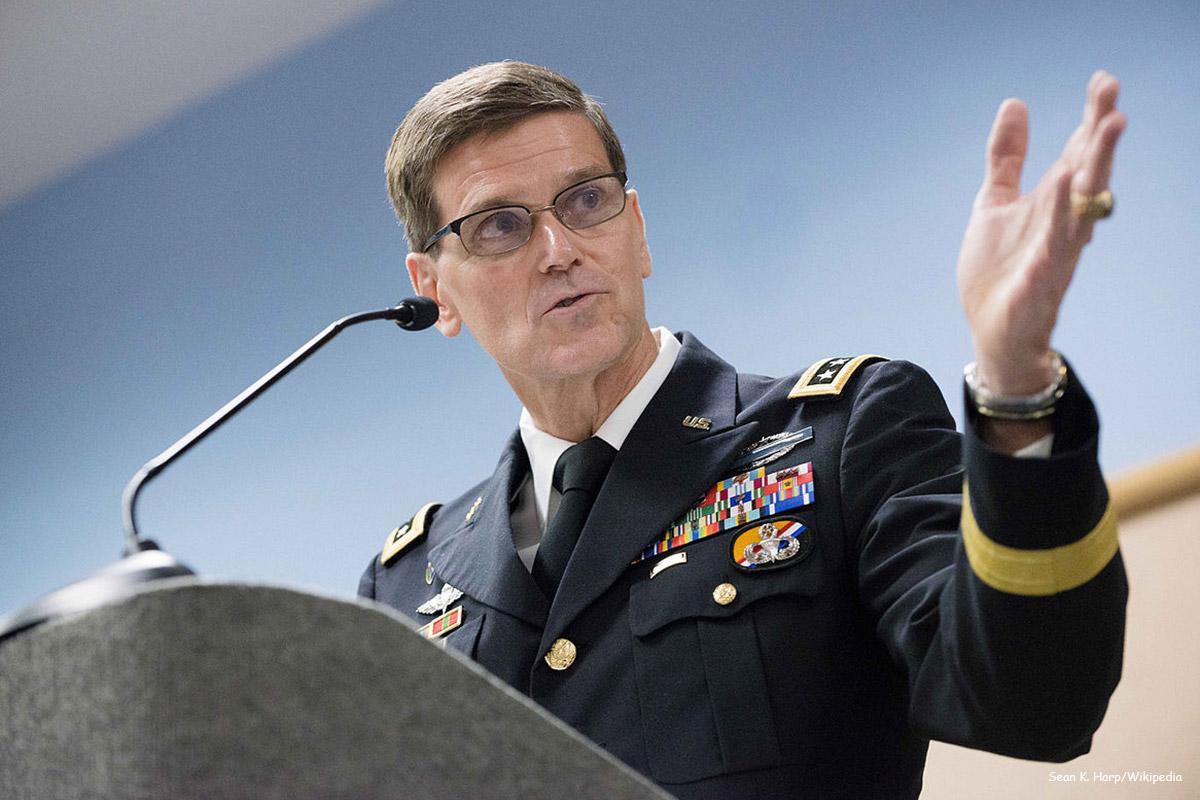 US keeps supporting the coalition in Yemen , despite Yemenis’ anger

The US keep increasing its support for Saudi Arabia since the onset of the warfare. It also provides the forces with bombing coordinates and has deployed a commando force on the kingdom’s border .

The top general overseeing US military operations in the Middle East met Wednesday with Yemen’s chief of staff in southern Yemen , Aden, under the control of UAE , main part of the US -backed Saudi-led coalition.

According to a Yemen’s official news agency, Gen. Joseph Votel, head of the US Central Command (CENTCOM) and Major General Taher al-Aqili discussed many issues.

“Yemen will not be the starting point of terrorist groups but will be a part of international peace and security,” al-Aqili said.

“The US supports the legitimate government in Yemen and wants peace and stability in the country,” Votel noted.

US President Donald Trump has been very supportive of the Saudis after inking a hefty $110-billion arms deal with the oil-rich kingdom last year.

The US Air Force has recently put out request for information (RFI) forms, calling on contractors to come forward with pricing and availability details for training no less than 41 Royal Saudi Air Force personnel, the website The Young Turks network reported Thursday.

In an opinion piece published by The Washington Post on Wednesday, Sheikh Meshal bin Hamad Al Thani said Riyadh and Abu Dhabi are busy cutting deals with al-Qaeda terrorists operating in Yemen instead of making efforts to restore peace to the Arabian Peninsula state and end the humanitarian crisis of their own making there.

The senior Qatari diplomat based his remarks on an investigation by the Associated Press, which blew the lid off the secret collaboration between the Saudi-led coalition waging war on Yemen and the al-Qaeda terrorists active there.

The AP study found that “the coalition cut secret deals with al-Qaeda fighters, paying some to leave key cities and towns and letting others retreat with weapons, equipment and wads of looted cash,” while “hundreds more were recruited to join the coalition itself.”

Yemen’s War Media released a footage on Saturday which showed a giant military plane refueling two Saudi jets and said in its description that the tanker was American.

The United States has been providing fueling services to the aircraft flown by a Saudi-led coalition which has been attacking Yemen since 2015, among other variations of combat logistics support.

Thirty-one civilians, including 22 children and four women, lost their lives in a strike hitting a vehicle in the Durayhimi city in Yemen’s coastal al-Hudaydah Province on Thursday.

Back on August 9, Saudi-led warplanes hit a school bus in the town of Dhahyan in Yemen’s northern province of Sa’ada, killing a total of 51 people, among them 40 children, and leaving nearly 80 others wounded.

A leading defence analyst company expects Gulf states to increase their defence spending to some $100 billion by 2019.

According to a new report published by Jane’s by IHS Markit yesterday, the six Gulf Cooperation Council (GCC) countries registered a six per cent growth in military spending in 2018.

According to the report, spending by the GCC countries will continue to increase in the next five years, reaching some $117 billion by 2023.

A report provided by Yemeni military figures, who worked with the Saudi-led war coalition against Yemen, and obtained by Al Jazeera revealed that detainees in UAE-run jails in southern Yemen were subjected to sexual abuse by Emirati army personnel and their Yemeni surrogates.

On June 20, the Associated Press reported that Emirati officers had been torturing and sexually assaulting hundreds of captives at UAE-run prisons in southern Yemen. According to the report, the UAE runs a network of at least 18 secret prisons.

A month later, Amnesty International also reported that the UAE and its allied local militia had been torturing captives at a network of clandestine prisons in southern Yemen.

Forces loyal to former Yemeni president Abd Rabbuh Mansur Hadi have clashed with people protesting against economic woes and the Saudi war on their country, killing one demonstrator.

For a third consecutive day, Yemenis on Wednesday took to the streets of the southern provinces of Hadarmaut and Aden, which are controlled by pro-Hadi troopers .

The demonstrators expressed anger at the worsening economic situation in Yemen, including rising prices and the collapse of the national currency.

They also chanted slogans against the coalition , which have been leading an offensive, code-named Operation Decisive Storm, on Yemen since March 2015 in an attempt to reinstall Hadi, a staunch ally of Riyadh, and crush the Houthi Ansarullah movement, paert of the Yemeni army forces.

In March 2015, the US backed –Saudi-led coalition started  a war against Yemen with the declared aim of crushing the Houthi Ansarullah movement, who had taken over from the staunch Riyadh ally and fugitive former president Abd Rabbuh Mansur Hadi, while also seeking to secure the Saudi border with its southern neighbor. Three years and over 600,000 dead and injured Yemeni people and  prevented the patients from travelling abroad for treatment and blocked the entry of medicine into the war-torn country, the war has yielded little to that effect.

Aden city, which was occupied by UK but now under the control of UAE, and the rest of the southern cities witness an insecurity situation that increased the assassinations of Imams of mosques and security and military leaderships.

The UAE took control of Aden under the pretext of confronting the so –called “Houthis” , part of the Yemeni army forces and supported the establishment and formation of armed elements  there.

What happened to almost 500 paid fighters in the West Coast!