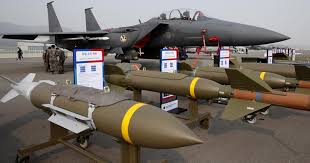 Germany has approved arms exports to Saudi Arabia worth $295 million in contravention of the coalition government’s own rules banning the transfer of weapons to countries “directly” involved in the Yemen war, reported the Daily Sabah.

Citing the country’s Economy Ministry figures , the Turkish paper also reported that the other eight countries involved in the Yemen conflict as part of the Saudi-led alliance received arms worth $28 million from Germany in the last six months.

It’s thought that between 14 March and 23 September the government approved 87 export permits for the members of the alliance.

The exports are said to have been approved despite an agreement not to sell arms to countries “directly” involved in the Yemen war. The deal was forged during the formation of the coalition between Chancellor Angela Merkel’s conservative bloc and the Social Democrats in March after months of political wrangling. It was not made clear which countries were meant by the phrase “directly”.

According to the UN High Commissioner for Human Rights, almost two-thirds of reported civilian deaths in Yemen have been caused by the Saudi-led bombardment.

Despite the terrible backdrop, and intensifying international pressure, the Saudi regime has been able to count on the uncritical political and military support of a handful of powerful and compliant governments. One of those is Germany, which has armed and supported the bombardment every step of the way.

How many more massacres are needed before Britain ends its arms sales?

Info. report of the Saudi violations and crimes in Yemen “18 Sep 2018”