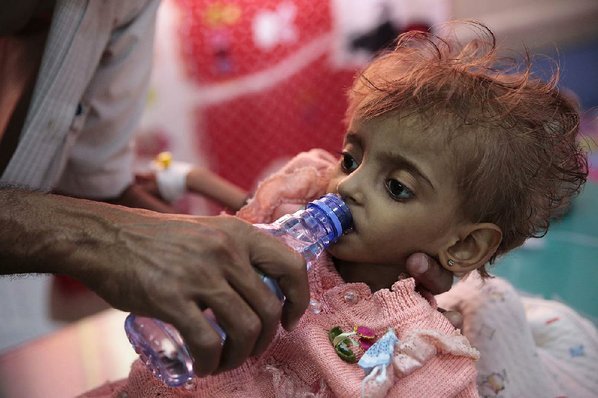 Endless Suffering of Civilians by Coalition to Obliterate Yemen

In Europe and across the Atlantic, officials like to talk about the war in Yemen as a horrible humanitarian crisis. They also like to sell weapons to the Saudi-led coalition, which bears most of the blame for that crisis.

French President Emmanuel Macron talks about “the risk of harm to civilian population” as $3.5bn worth of French Leclerc tanks roll across Yemeni deserts. A Canadian MP calls the Yemeni war the “worst humanitarian crisis in our time,” and Prime Minister Trudeau talks about “transparence, openness and rigor” in dealing with the Saudis “but the $12bn armored vehicles sale stands”.

Spain “finds no reason” to not go forward with delivering $9.2bn US-made missiles to Riyadh.

Compared with the streams of weapons and cash, humanitarian deliveries to Yemen are a trickle: over 20 million people there are in need of aid, more than five million are on the verge of starvation. Images from the Aslam region, one of the country’s poorest, show people boiling and eating tree leaves to survive.

“The current leadership of Saudi Arabia feels empowered and enabled by the backing from the US, UK and France,” says Robert Naiman, the director of the Just Foreign Policy organization. Which means that as long as massive dollar signs are dangled in front of Western leaders, and arms manufacturers hold sway over their judgment, the suffering in Yemen is likely to persist.

On March 25, 2015, Saudi Arabia, with the cooperation of a number of regional allies, began a clear military invasion against the innocent Yemenis.
The Saudis along with their regional allies made this blatant aggression against Yemen under the pretext of ‘restoring legitimacy’ and targeted Yemeni civilians and the country’s infrastructure in the first hours of the military attack.

Many hospitals, schools, universities, shopping malls, even beaches, agricultural fields, fishing boat – many of which are sources of livelihood for people – bridges, strategic communication centers, power plants, water supplies, and others have become targeted by their heavy attacks.