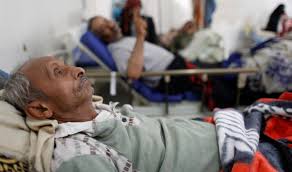 Report: Dialysis patients keep suffering with no sign of support from the world

The dialysis center in the hospital of the al-Thwra in Sana’a has been crowded with patients suffering from kidney failures and kidney transplants, where those patients have tried to get the worlds attention through several protest vigils, most recently was last month before the World Health Organization (WHO) in Sana’a, in which they held banners calling on international organizations to provide treatments and solutions for dialysis as a result of the lack of supplies.

The dialysis center at al-Thawra Hospital is one of the 18 centers in Yemen that is struggling to keep up with the patients, while local and international reports indicate that more than 5,000 Yemeni patients with renal failure are at risk of dying due to the continuous deterioration of the country’s health system.

The center had to reduce the hours of the hemodialysis treatment, where it should last for about four hours; however, the center decided to reduce the time for about three hours due to lack of the medical supplies for the treatment which endangers the lives of the patients.

Dr. Abdul Latif Abu Taleb, head of the hospital of the al-Thwra, said that the kidney patients department in the hospital accommodates more than 500 patients who need dialysis sessions, and their lives are at risk after the decrease in the duration of treatment due to lack of solutions, which sometimes depletion. At least 180 cases of washing per day at the rate of two hemodialyses per week for each patient.

Dr. Mujahid al-Batahi, Head of the Department of Nephrology and Kidney Transplant at the Hospital of the al-Thawra in Sana’a, said that the center receives 200 cases of kidney dialysis daily, explaining that as he moves from room to another in the hospital, he sees dozens of patients waiting for their turn to get their hemodialysis treatment, adding that the patients’ conditions are worsening every day.

Dr. al-Batahi added that some cases died because of the lack of treatments and solutions purchased from newly unknown local companies other than the company that we have a contract with to supply the devices, solutions and supplies; consequently, sometimes when patients go for their sessions, clots of blood in the filters occur, which causes the patient to lose a large amount of blood and may then have to be transferred to intensive care unit for a transfer of blood process, despite the fact that the patient already suffers from chronic anemia, which is the loss of blood.

“The continued shortage of medicines and medical solutions for renal failure is endangering patients’ lives.

However, the problems of patients with renal failure do not just end with the shortages of medical materials and solutions, but also to the cost of medicines that they have to buy from pharmacies at prices that exceed their purchasing limit, which has fallen tragically as the conflict continues to escalate, affecting more than 80 percent of the population, who are threatened with hunger and disease.

The dialysis center at al-Thawra Hospital is suffering from the failure of the operational budget to ensure that its doors remain open to prevent the death of these patients. The center is open 24-hours because of the increase in patients who come from all over Yemen to the General Hospital of the al-Thawra in Sana’a to receive hemodialysis treatment for them without any interruptions.

UN reports confirm that three years of escalating conflict have turned Yemen into the worst human-made humanitarian crisis since world war II. Three-quarters of the population, or 22.2 million people, in need of humanitarian assistance, including 11.3 million people who urgently need emergency assistance.

Yemen is Another US Dirty War