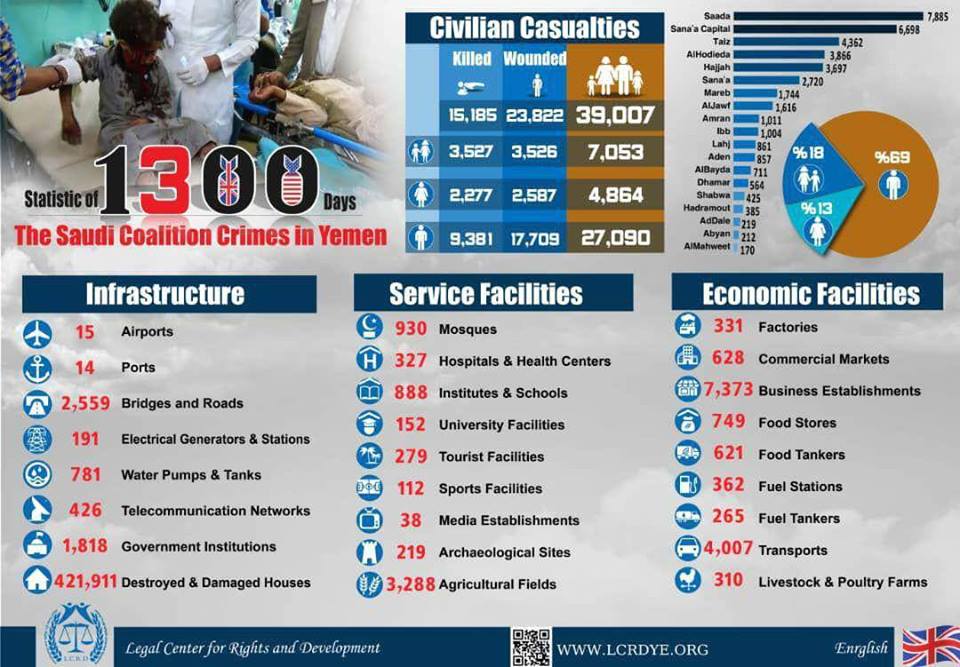 A source was reported from the outlets of media affiliated with the Saudi-led coalition that claims that the desire of Saudi Arabia and the UAE “are to keep the port of Hodeidah open and not to damage the economic facilities.” However, the reality of the case reveals the falsity of such allegations after the failure of the militias supported by the United Arab Emirates along with Saudi Arabia, for four days (since Friday dawn), to achieve any progress in Hodeidah or taking control of sites inside the city; thus, they resorted to the targeting of economic establishments, the last of which was the targeting of the occurred last Tuesday, on Red Sea mills silos.

The mills were opened in 2016 after having undergone expansions, updates and development in machinery, equipment and daily production capacity, producing the equivalent of 2,000 tons per day of white flour.

ِِThe Yemeni Deputy Foreign Minister Hussein al-Azzi commented on the tragedy, stressing that the coalition’s targeting of the Red Sea mills is a war crime against humanity.

The Deputy Minister of Foreign Affairs Hussein al-Azzi said: “The Red Sea mills meant bread for Yemeni citizens, where are your morals? Is it because the Yemeni army alongside the popular committees resulted in your failure to advance, so you went back to target the citizens’ sources for food”

Abdul-Malik al-Ajri, a member of the Political Bureau of Ansar Allah, said: “The targeting of the Red Sea mills, which are the only mills operating in Yemen in feeding millions is a collective punishment that targets citizens sources of food and will have catastrophic repercussions.

The international community and the American regime are responsible for this crime as long as they keep covering up such crimes committed by the Saudi coalition, It is time to say enough and start disposing of their crimes, hypocrites”, he added.

Since the start of the Saudi-led coalition military campaign on Yemen, factories were bombed along with warehouses and other vital economic facilities in Yemen.

Legal Center for Development Rights monitored and documented crimes and flagrant violations that go against the provisions of international law, particularly international human rights law, which was committed by the Saudi-led coalition.

The Center stressed the continuation of the coalition in launching its raids on all civil and cultural facilities under international protection, especially the systematic targeting of the basic sources of life in the province of Hodeidah and other provinces, which the population can not live without in order to survive.

The Center pointed out that the coalition countries have launched since the dawn of Friday, July 27, 2018 a number of hysterical and indiscriminate aerial raids on civilian facilities and centers in the city of Hodeidah, where the coalition aircraft conducted several raids on the radio station building of the Hodeidah station, anchorage fishing centers within the city of Hodeidah and al-Awadi plastic bags factory in Kilo-16 in the district of al-Hali.

The coalition warplanes did not stop there, they brutally sought to target vital infrastructure that is considered to be essential for the survival the residents of Hodeidah, where a drinking water station in al-Baidah area in Hodeidah city was struck by two aerial raids. The water station was benefiting 50% of the population of the city of Hodeidah with potable water.

The Center confirmed that Saudi aerial raids led to the destruction of five artesian wells, taking them completely out of service while damaging more than 17 others, which caused the stop of the flow of drinkable water to about hundreds of thousands of residents of the city of Hodeidah. Such targeting is considered a violation of international humanitarian law, which prohibits attacks on civilians’ facilities that they can not dispense them for their survival. The raids also destroyed the radio building and disrupted the fishing grounds, while fear is spreading among women and children and residents of the province of Hodeidah in general due to indiscriminate attacks on these facilities.

In earlier reports, Human Rights Watch said that raids by Saudi-led coalition forces had bombed factories, warehouses and other civilian economic facilities in Yemen. In the absence of credible and impartial investigations in Yemen, Saudi Arabia and the rest of the coalition must agree to conduct an independent international investigation into these and other attacks.

“It seems that repeated air strikes on civilian factories are aimed at harming Yemen’s already collapsed economy for a long time to come”, HRW said in a statement.

Who claims the lives of citizens in southern Yemen?