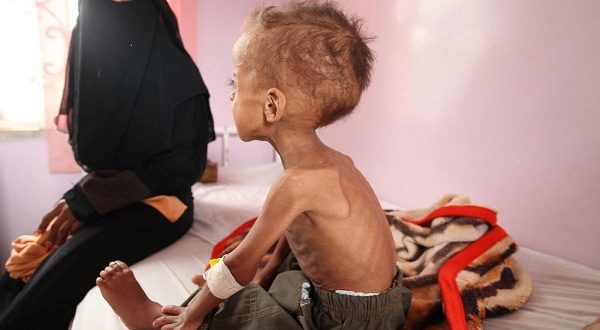 Nearly 85,000 Children May Have Lost Their Lives from Starvation; 11 Million Children in Need of Humanitartian Aid

About 85,000 children under the age of five may have died of acute malnutrition during the three-year-old war in Yemen, Save the children British-based organization revealed on Tuesday.

Save the Children, a British-based organization said the aforesaid number was equal to the total number of children under five in Birmingham, Britain’s second largest city.

Last month, the United Nations warned that up to 14 million Yemenis were on the brink of starvation.

The United Nations is seeking to revive talks to end a three-year war that has caused the worst humanitarian crisis in the world.

How did the British organization count the number of victims?

Yemen’s aid workers say many deaths are not reported because half of the facilities are not functioning, and many people are too poor to access private functioning health facilities.

According to Save the Children, the number of deaths of children under the age of five has not received treatment for acute malnutrition based on data collected by the United Nations.

According to conservative estimates, about 84,700 children died between April 2015 and October 2018. The rise in food prices and the devaluation of the Yemeni currency, as a result of Saudi war on Yemen, put more households at risk of food insecurity. The British charity has blamed the Saudi imposed blockade on Yemen for increasing the number of people exposed to famine, especially as heavy fighting continues around the main port of Hodeidah, which the United Nations mainly depend on for importing humanitarian aid into the country.

The port is the main source of about 80% of food imports to Yemen. Trade imports through Hodeidah have declined by more than 55,000 tons per month. This is enough to meet the needs of 4.4 million people, including 2.2 million children, according to the organization.

UN efforts to address the humanitarian crisis in Yemen/ What happens to children who are malnourished?

According to historical studies, neglecting the treatment of severe malnutrition can lead to 20 to 30 percent of children dying each year, the British Foundation said.

“For every child killed by bombs and bullets, dozens are dying of starvation, which can be completely prevented,” Tamer Kirolos, Save the Children’s Country Director in Yemen, said.

“The children who die in this way suffer greatly because the vital organs of the body slow down and eventually stop completely, their immune systems are so weak that they are more susceptible to infection, and some are so severe that they can not cry,” Kirolos added.

“Parents have to see their children suffer and die before their eyes, without being able to do anything.” He also warned that the lives of about 150,000 children are threatened in Hodeidah with “a significant increase” in the air strikes on the city in recent weeks.

Nusair, a boy child who is only 13 months old, is among the children suffering from acute malnutrition and is closely followed by Save the Children.

Nusair underwent treatment in August, but by October his condition deteriorated again. During this period, he and his mother were forced to move to a remote area because of the increasing fighting near their home, which led to their inability to go to the hospital because it was far.

“I can not sleep, it’s a torment, I’m worried about my children, I can not live if they get hurt,” said his mother.

The situation in Yemen keeps worsening each day because of the Saudi-led war on Yemen that was waged in March 2015, which has claimed the lives of over 56,000 Yemenis, according to a nonprofit conflict-research organization.

The United Nations Children’s Fund (UNICEF) said the upraising calls for a ceasefire in Yemen were promising, but the country’s children need the war to end.

UNICEF Executive Director Henrietta H. Fore stressed that Yemen’s children have been suffering for more than three years of conflict and are suffering the consequences of war by adults and live in a society ravaged by violence, cholera and malnutrition.

“Their hearts are filled with fear and sadness, which will fill them for life,” she said.

The UNICEF statement said at least 6,000 children were killed or seriously injured by the fighting, which caused the collapse of basic services including water, health care and sanitation, pointing out that with the collapse of the economy, families can not afford to feed their children or move them to Health facilities.

“In Yemen, one child dies every 10 minutes for preventable causes, including malnutrition and vaccine-preventable diseases,” the statement said.

Increasing calls for a ceasefire and resumption of political talks have offered a glimmer of hope for Yemeni children that peace may someday return to their country, Henrietta H. Fore said.

Recent international and Western pressures on the coalition have increased the need to end the war in Yemen, where the conflicting parties are preparing for peace talks by the end of November, under the auspices of the United Nations.

The United Nations envoy to Yemen, Martin Griffith, is seeking to re-launch peace talks in Sweden within the coming few weeks under the auspices of the United Nations and the support of the major powers of America, Britain and France, as international pressure mounts to end the war.

“I sincerely hope that as the Security Council discusses the issue of Yemen and with the resumption of political talks in the coming few days, the parties to the conflict and those who influence them will listen for the calls seeking for a lasting peace and put the interests of Yemen’s children at the forefront,” UNICEF executive director added.

More than 22 million Yemenis, or more than two-thirds of the population, are in need of some form of humanitarian assistance and urgent protection, including 8.4 million people who do not know how to get their next meal, and around 2 million children suffer from acute malnutrition in this impoverished state.

Saudi-led coalition prevents the access of foreign journalists into Yemen