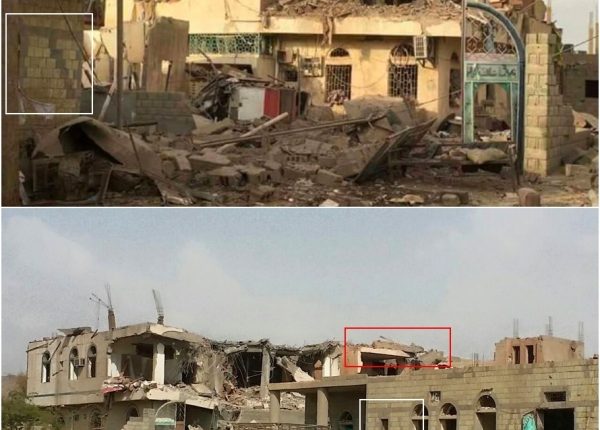 – Open sources, including satellite imagery, indicate that on 2015/05/12 sometime after 1515 AST two buildings in Abs were destroyed, and other buildings damaged, in an airstrike by the Saudi-led Coalition (SLC)

– Although there were multiple reports of different locations being attacked, it was consistently stated that a prison was one of the targets of this attack. We identified what we believe to be this prison in the report.

– The Joint Incidents Assessment Team (JIAT) stated it had targeted two weapon depots in Abs on 2015/05/13 that it claims were used by the Houthis. The JIAT also claimed that it did not target nor damage the Abs prison, and that the buildings it targeted were 900 meters and 1,300 meters away from the prison, respectively. We identified what we believe the SLC may believe is the prison in question.

The incident took place in the town of Abs in the Hajjah governorate in Yemen. The structure which was allegedly hit is known as Abs Prison (also as Abs Shefr Prison, and Abs/Kholan Prison).

Of these buildings, there is user generated content posted on or shortly after 2015/05/12 depicting Building 1 and Building 2. Currently, there do not appear to be any images or videos showing Building 3. There are also images depicting a fourth location which suffered heavy damage, Building 4, which could not be geolocated.

A series of images from various sources depict this building. A set of three doorways can be seen in several images, along with distinctive marks on the wall around these doorways.

Image from this al Mersad report on the attack. Note that the dots and marks around the doorway match.

Top: image from Facebook post. Bottom: image from Al Mersad report that we have already established is from this location.

All the images above share certain key features which demonstrate they were all taken in the same place. The features seen in these images can also be seen at the location of Building 1.

Geolocation of image depicting Building 1. Top: image from Al Mersad report.  Bottom: satellite imagery taken on 2017/12/01 (courtesy of Google/DigitalGlobe). Note the three doorways correspond to three rooms on the east side of the compound.

Geolocation of image within Building 1. Top: image from Facebook post, Bottom: satellite imagery taken on 2017/12/01 (courtesy of Google/DigitalGlobe). Note the three doorways to the right of the Facebook image and the tall building on the center left.

There are two videos from this location, one of which was posted on Facebook by a person named Majed Massoud. Majed may have filmed this video, but it is not possible to be sure with the available information. This video will be referred to as the “Majed video”.

A second video with a 21Sept.com watermark was also taken at this location. This video will be referred to as the 21Sept video. This video may have been taken by a cameraman wearing military-style waist-coat.

We can confirm these two videos were taken in the same place at roughly the same time, as they both film the same casualty in the same location.

The analysis above confirms that at least part of the 21Sept video was filmed at this location during this incident. We will now use the Majed video to geolocate Building 2.

As of the writing of this report, we have not discovered any open source information depicting Building 3. This will become relevant later in the report.

Building 4 appeared in several different social media posts, but it could not be matched to any destroyed building found in Abs. A Facebook user named Abou Mohamed Abdel Karim “ابو محمد عبد الكريم” made a post on 2015/05/12 with three images of a damaged building, stating that it was his brother’s house. He also stated that Khalid Yahya’s “خالد يحيى” house had been attacked.

Top: Image from this Facebook post, which re-occurs across other posts. Bottom: Image posted by Mr Karim, allegedly of his brother’s house.

The majority of open sources appear to depict Building 1 or casualties from that location. Two videos depicted Building 2. Due to the lack of open sources depicting Building 3 and Building 4, these locations require further investigation.