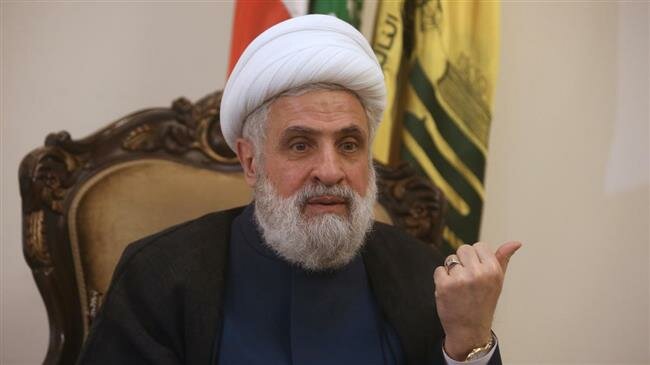 US Plots in Middle East will not Succeed, Top Hezbollah Official Says

A high-ranking member of the Lebanese Hezbollah resistance movement says US President Donald Trump’s administration is in a state of confusion concerning the developments unfolding in Middle East, stating that Washington’s schemes in the region will not thrive.

“(The United States of) America knows that its ability to change equations in the region is weak because there are resistance fighters and a resistance front. Therefore, it cannot dictate what it wants and impose its Israeli and non-Israeli plans,” Hezbollah Deputy Secretary General Sheikh Naim Qassem said.

He then advised leaders of the Persian Gulf kingdoms to review their foreign policy, emphasizing that US plots in the Middle East will fail as the anti-Israel resistance front is confronting them with all available means.

On March 8, the Hezbollah secretary general said the anti-Israel resistance front, thanks to solid and unwavering support from Iran and Syria, has well managed to frustrate the Tel Aviv regime’s plots in the Middle East.

“All Lebanese and Palestinian resistance groups, supported by Iran and Syria, thwarted the project to pull the plug on the front. The steadfastness and resilience demonstrated by Hezbollah in Lebanon, Gazans, Syria as well as Iran foiled the fiendish plot against the region back in 2006,” Sayyed Hassan Nasrallah said as he addressed his supporters via a televised speech broadcast live from the Lebanese capital, Beirut.

Sheikh Qassem on January 17 accused the Israeli regime of being behind most crises in the Middle East region.

“The Israeli occupation [regime] is the biggest problem in our region. It intervenes in world’s issues… [while] the Unites States and Europe help it to normalize relations with some Arab countries, so that the regime is accepted internationally and regionally in particular,” Hezbollah Deputy Secretary General Sheikh Naim Qassem said in an interview with Arabic-language al-Manar television network.

He added, “Israel is the main problem in the region as it is behind many existing crises. This region will continue to suffer from successive and cumulative crises as long as the Israeli occupation [regime] exists and acts in such an aggressive manner under American supervision.”

China Says won’t be ’Bullied’ by US Amid Trade War