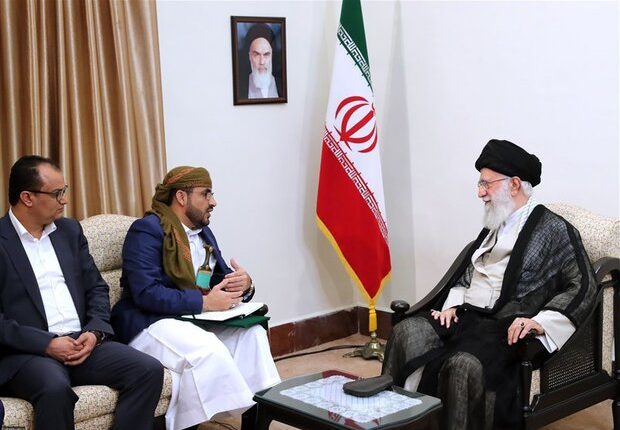 Critical points in meeting between Yemeni delegation and Iran’s Leader

Over the last few days, the media all over the world have put their focus on a meeting between Ayatollah Seyyed Ali Khamenei, Leader of the Islamic Revolution, and a delegation of Yemeni resistant group, Ansarullah.

Different think tanks are now trying to analyze this important meeting from a variety of aspects.

The meeting was particularly important in the following respects:

According to official protocols and formalities, this delegation was not as high as others who meet the Leader. It was the first time that Ayatollah Khamenei had a face to face meeting with a spokesperson of a people-based resistant movement.

Anyhow, the Leader greeted them like a high-level official delegation and all the standard formalities that are applied in meetings between the highest international officials were also observed in this meeting, and there were even more intimacy and warmth between the two parts. This shows the importance of Yemen and the resistance of its people for the Leader and the Islamic Republic of Iran.

The time of the meeting

The meeting was held in one of the most critical points in Yemen’s modern history. Four years and four months of brutal attacks, the invaders of Yemen are now starting to turn on each other as their alliance is falling apart. Last week, the last strongholds of Saudi Arabia in Yemen collapsed by their closes ally, the United Arab Emirates (UAE). Saudis also lost the control of Aden which was previously the capital of Mansour Hadi’s puppet government.

Delivery of a message

Over the meeting, a letter from Abdul-Malik al-Houthi, the leader of Ansarullah was handed to Ayatollah Khamenei who immediately opened the letter and read it. The Leader could have read the message later but he did this as a gesture to show his affection for the revolutionary movement of Yemen. Contrary to this, two months ago when the Japanese Prime Minister tried to deliver a message from the United States president to the Leader, he refused to receive the message altogether.

The subject of the meeting

Over the meeting, Mohammed Abdulsalam, the spokesman for Ansarullah delivered the warm regards of the movement’s leader, Abdul-Malik al-Houthi and other Yemeni people who are fighting the invaders. He told Ayatollah Khamenei, “We regard your leadership as the continuing leadership after the Prophet Muhammad (S) and his successor Imam Ali (AS). Your attitude of seeking justice for the oppressed Yemenis is the same policy of Imam Ali (AS) and the founder of the Islamic Republic, Imam Khomeini, this is the source of great blessing and hope for all the people.”

For his turn, the Leader said that “every devoted nation who believes in God and the reality of divine promises, will win. On this basis, victory will surely be with the oppressed and faithful people of Yemen.”

It is not the first time that the Leader is making such as firm prediction, as he made the same true promise before Lebanon’s Hezbollah went into its 33-day war with the Zionists.

Ayatollah Khamenei also warned about the danger of Yemen’s division. He said that invaders including Saudi Arabia and UAE are trying to divide Yemen, but the people should stand firmly against this scheme and defend a united, undivided and autonomous Yemen.

This advice was based on Yemen’s social structure as the country consists of different ethnic and religious groups and some of the tribes who reside in southern parts are willing to get separated from the country. UAE, on the other hand, is supporting these movements, so the country is at risk of getting divided and the only solution, as the Leader said, is an intra-Yemeni dialogue.

The people-based government of Yemen constitutes of Ansarullah and its other revolutionary allies including the government, the Parliament and public committees and organizations that were established after the revolution, but it is still not accepted as an official government by the world countries and international organizations; conversely, the official status is given to Mansour Hadi’s government which is now practically ended as he has fled the country and lives in exile.

The meeting between the Leader and the Ansarullah delegation was an ending to the policy of ignoring the legal government of Yemen which is born out of the revolution and changing its De facto status to a De jure one in both regional and international arenas.