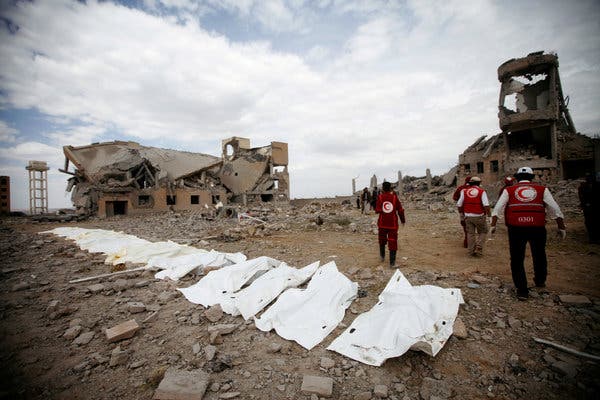 More than 100 people are believed to have been killed in tge airstrike by the Saudi-led military coalition, backed by the US, on a detention centre in Yemen, the International Committee of the Red Cross (ICRC) said Sunday.

The ICRC rushed to the scene in the city of Dhamar with medical teams and hundreds of body bags.

“The location that was hit has been visited by ICRC before,” Rauchenstein told AFP from Dhamar. “It’s a former college building that has been used as a detention facility for a while.”

“What is most disturbing is that (the attack was) on a prison. To hit such a building is shocking and saddening – prisoners are protected by international law.”

Rauchenstein said that over 100 people were estimated to be dead, and that at least 40 survivors were being treated for their injuries in hospitals in the city, south of the capital Sana’a.

ICRC teams collecting bodies were “working relentlessly to find survivors under the rubble”, he said, but cautioned that the chances of finding any were very slim.

The British government prepares to appeal a court ruling that forced it to suspend sales of UK arms to Saudi Arabia because they are used by Riyadh against civilians in Yemen.

Bellingcat, a non-profit organization that specializes in open-source investigations, said Saudi-led attacks that potentially breach humanitarian law have not stopped, which indicates “a clear risk that weapons sold by the UK may be used in breaches”.

In a televised speech aired by Al-Masirah TV Channel on the new Hijri year, Sayyid al-Houthi condemned this heinous and brutal crime.

He noted that the targeting of prisoners in Dhamar’s prison is “additional evidence that the aggression coalition targets all Yemenis, even those loyal to it.”

“The enemy deliberately targeted the prisoners in Dhamar at a time when a large number of them were preparing to go out as part of an exchange deal,” the Sayyid said.

Griffiths, in a joint statement with Lise Grande, Humanitarian Coordinator for Yemen, called for an investigation into the bombing on prisoners of war, stressing that a justice should be achieved.

“Sunday’s bombing is a tragedy, the human cost of this war is unbearable. We need it to stop. Yemenis deserve a peaceful future. Today’s tragedy reminds us that Yemen cannot wait,” the statement said.

The GPC said in a statement ” this massacre confirms the aggression forces seek to thwart the UN-sponsored Stockholm Agreement about the prisoners exchange deal.”

The statement called on the United Nations to take responsibility and quick move to stop the aggression, lift the siege imposed on the Yemeni people for achieving peace.

In its meeting chaired by Speaker Yahya Ali al-Ra’i, the parliament pointed out that the targeting of prisoners by the aggression coalition came despite the knowledge of the United Nations (UN) and the International Committee of the Red Cross (ICRC) on the whereabouts and conditions of the prisoners who were on the exchange list being negotiated under the UN auspices.

It affirmed that the international community’s silence towards these war crimes has encouraged the aggression coalition to continue to commit further crimes.

A protests rally was organized by tribes and sheikhs of Yemeni provinces to condemn the crime .At the rally, the participants raised banners and slogans denouncing the crimes the s horrific massacre, which left dozens of dead and wounded prisoners listed on the exchange deal in Stockholm Agreement.

The protesters held the United Nations and the international community full responsible for the heinous crimes committed by the coalition against the Yemeni people.

Yemenis harm the Saudi-led coalition in Jizan with Qasif 2K