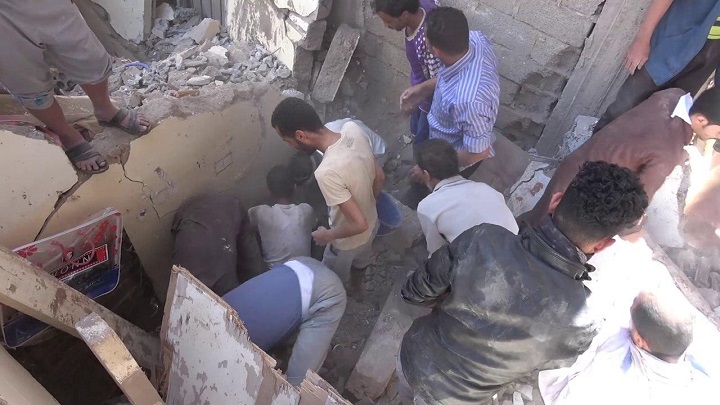 Britain has earned eight times more from arms sales to Saudi Arabia and other members of the coalition fighting in Yemen than it has spent on aid to help civilians caught up in the conflict, a report has found. Campaigners have criticised the approach as “completely incoherent”.

Since Yemen’s civil war escalated in 2015, the economy has collapsed, hunger has become so widespread that the UN has warned 10 million people are on the brink of famine and there have been devastating outbreaks of infectious diseases including cholera.

Britain has given £770m in food, medicines and other assistance to civilians in Yemen over the past half decade, the report by Oxfam found, making the country the sixth largest recipient of British aid. But over the same period it has made £6.2bn of arms sales to members of the coalition fighting there, including Saudi Arabia and the United Arab Emirates.

“The UK government’s approach to Yemen is completely incoherent – on the one hand offering lifesaving aid to people devastated by the conflict, and on the other, helping to fuel that conflict by arming those involved,” said Danny Sriskandarajah, Oxfam chief executive. The other members of the coalition fighting in Yemen who have bought UK arms since 2015 are Kuwait, Bahrain, Egypt, Jordan, Senegal and Sudan, the report said.

The international alliance first intervened in Yemen’s civil war in 2015 to try to restore the Yemeni government ousted from power by the Houthis, a rebel group backed by Iran. Thousands of civilians have been killed since then, with indiscriminate bombing by the Saudi-led coalition accused of being responsible for about two-thirds of the 11,700 killed in direct attacks. The court of appeal in June ruled that arms sales to Saudi Arabia – which account for the vast majority of the total – were unlawful. The judgment also accused ministers of ignoring the question of whether airstrikes that killed civilians in Yemen broke international law.

Liam Fox, then international trade secretary, responded by suspending new arms sales to Saudi Arabia while promising to appeal against the verdict.

Oxfam called on the government to respect the court judgment, halt arms sales indefinitely, and focus its efforts on halting the conflict and getting more donations for emergency relief. The UN fund for Yemen has received only a third of the funds needed; most vaccination programmes have already stopped as a result.

“What the UK has given in aid to hungry, homeless Yemenis is dwarfed by what it has gained in arms sales to Saudi Arabia and its coalition partners,” the report said. “The UK should be doing everything it can to end the war.”

It also emerged recently that prime minister Boris Johnson, while foreign secretary in 2016, recommended that the UK allow Saudi Arabia to buy British bomb parts expected to be deployed in Yemen, days after an airstrike on a potato factory in the country had killed 14 people.

A day after the sale was recommended for approval, a village school in Yemen was hit by another deadly airstrike, part of a pattern of recurrent strikes on civilian infrastructure including hospitals.

Oxfam’s report detailed multiple water treatment projects, a warehouse and a cholera treatment centre that were hit and damaged or destroyed by airstrikes between 2015 and 2018.

Despite repeated requests, the charity has not been interviewed by the British Ministry of Defence or Saudi Joint Incidents Assessment Team about these attacks, it said.

“The Saudi-led coalition are paying only a fraction of the true price of these arms sales,” Sriskandarajah said. “The real cost is being borne by millions of Yemenis who have had to flee their homes, go without food and clean water, and endure outbreaks of disease.”