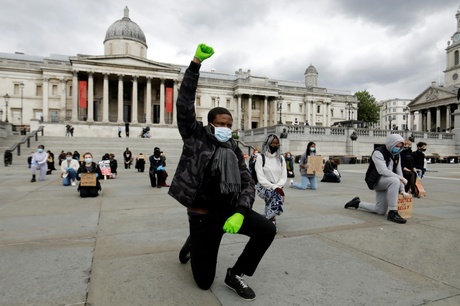 Rallies have been held in countries around the world in solidarity with the “Black Lives Matter” protest movement against racial discrimination in the United States.

The protest movement in the US gained new momentum following the death of African-American George Floyd in US police custody in Minneapolis on May 25. The 46-year-old died after a white officer pressed his knee on his neck for nearly nine minutes until he suffocated.

Tens of thousands of Americans have since been holding demonstrations across the United States to protest his death as well as police brutality and racial discrimination against people of color in general.

People in other countries have also risen up to support the US protesters.

The German city of Hamburg on Saturday was the scene of mass rallies in support of the anti-racism protests in the United States, with thousands turning out in the city center and holding banners that read, “Together we stand,” and “No justice, no peace.”

Wearing black, several hundred people gathered outside the US Embassy in Jamaica’s capital, Kingston, on Saturday to express their support for the US protesters.

Elsewhere, in Japan, the case of a Kurdish man who says he was stopped and shoved to the ground by Tokyo police became a rallying cry for protesters marching in solidarity with the Black Lives Matter movement on Saturday.

The governor of a Mexican state that was recently the scene of clashes between security forces and demonstrators over the death of a man in police custody apologized on Saturday for abuses perpetrated by police during the public protests.

Separately on Saturday, an indigenous chief in Canada said police forces beat him in March after an incident involving an expired license plate on his truck.

Also on Sunday, dozens of people in Hong Kong gathered in front of the US Consulate to protest the death of Floyd at the hands of police in Minneapolis.

The protesters were mainly international students and members of Hong Kong’s League of Social Democrats, which is a political advocacy group for human rights.

Jan/6: An Update of the Saudi Crimes and Violations in Yemen