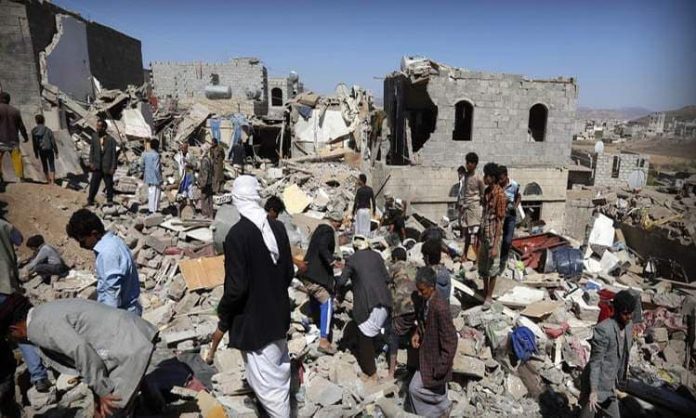 A prominent international charity organization says Coalition Saudi-Emirate and its allies have “no way to deny” carrying out a deadly airstrike on a prison that killed more than 80 people and injured hundreds others in Yemen’s northern province of Sa’ada.
A statement by Doctors Without Borders, known by its French acronym as the MSF, comes after the Saudi-led coalition denied any knowledge of the attack in question.

The MSF said that its staff had confirmed the prison in Sa’ada was destroyed and that a nearby hospital had run out of beds to treat the wounded.

“There is no way to deny that this is an airstrike, everyone in Sa’ada city heard it,” the MSF said.

The MSF added, “The hospital is facing a very difficult situation… with casualties lying on the floor,” as rescuers continue to claw through the rubble searching for survivors.

An unnamed member of the agency was quoted as saying in a statement, “I live one kilometer (half a mile) from the prison and my house was shaking from the explosion.”

Coalition Saudi-Emirate warplanes bombarded a detention center in Sa’ada province, killing at least 91 people, including migrants, women, and children, with reports saying that the death toll is expected to rise since many of the wounded were seriously hurt.

Reacting to the deadly aerial raids, Ahmed Mahat, the MSF’s head of mission in Yemen, said Saudis and their allies have a long history of targeting civilian targets across Yemen. “This is the latest in a long line of unjustifiable air strikes carried out by the Coalition Saudi-Emirate on places like schools, hospitals, markets, wedding parties and prisons,” Mahat said. “Since the beginning of the war we have frequently witnessed the terrible effects of indiscriminate coalition bombing on Yemen, including when our own hospitals have been attacked.”

The bombardment followed a Yemeni drone attack on the United Arab Emirates (UAE) on January 17, which itself came in retaliation for Abu Dhabi’s recently intensified role in the protracted war on Yemen.

Despite the coalition’s attacks on Yemen, the UN Security Council condemned the Yemeni drone strike on Friday, saying in a statement, “The members of the Security Council underlined the need to hold perpetrators, organizers, financiers and sponsors of these reprehensible acts of terrorism accountable and bring them to justice.”

The Coalition Saudi-Emirate war has also taken a heavy toll on Yemen’s infrastructure, destroying hospitals, schools, and factories since March 2015, when Riyadh and a number of its regional allies – including the UAE – launched the war to eliminate Ansarullah and reinstall former Yemeni President Abd Rabbuh Mansour Hadi, a staunch ally of Riyadh.

The campaign, accompanied by a tight siege, has failed to reach its goals, but it has killed hundreds of thousands of Yemeni people. The UN refers to the situation in Yemen as the world’s worst humanitarian crisis.