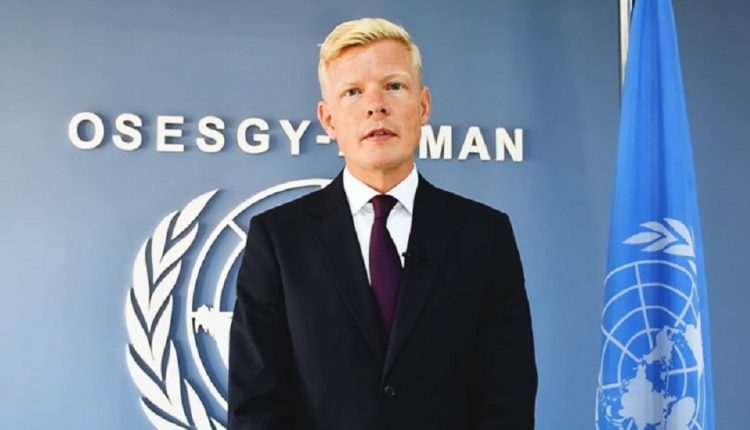 The UN envoy to Yemen, Hans Grundberg, issued on Thursday a statement regarding the extension of the UN humanitarian and military armistice in Yemen.

Grundberg’s statement, which was published on the website of the Office of the Special Envoy of the United Nations Secretary-General for Yemen, he intensified his contacts with all conflicting parties in support of the implementation of all provisions of the armistice and to explore opportunities to expand its scope and extend its term beyond 2 August.

“Extending and expanding the truce will increase the benefits for the Yemeni people, provide a platform for building more trust between the parties, and start serious discussions about economic priorities such as revenue and salaries, and security priorities including a ceasefire,” said Mr. Grundberg. The ultimate goal is to move towards a political settlement that comprehensively ends the conflict.”

Mr. Grundberg noted that thanks to the parties’ continued commitment, the truce had largely held for nearly four months, representing one of the longest periods of relative calm after more than seven years of ongoing conflict, during which the total number of civilian casualties was lower compared to the numbers before the truce. However, both sides raised concerns about alleged violations and incidents on several fronts. “Warring parties have obligations under international humanitarian law to protect civilians.

“I take reports of military escalation very seriously, especially when it comes to civilian casualties. Through the Military Coordination Committee, my office is facilitating dialogue and supporting de-escalation,” he said, hoping that the parties would continue to work under the umbrella of the Committee and establish a joint coordination room to deal with incidents in a timely manner.”

He explained, at the beginning of the negotiations, both parties made proposals to open roads in Taiz and other province, which was a positive indication of their willingness to engage in the talks, and the most recent UN proposal included three approaches put forward by Ansarullah and one advocated by civil society. Grundberg added that the Yemeni government accepted this proposal, but Ansarullah did not. The parties also recently announced their intention to open some roads unilaterally.

“Unilateral actions alone are not sufficient to ensure safe and sustainable passage of civilians along roads that cross front lines and are under the control of the various parties,” said Mr. Grundberg. The parties need to negotiate, coordinate and communicate with each other.
“We will not stop our efforts and efforts to bridge the views of the parties to reach an agreement to open the main roads in a sustainable and safe manner in Taiz and other province, and the priority for the current period of the armistice and any extension of it in the future will be,” he stressed.

Within the framework of the truce, the parties agreed on two commercial flights per week between Sanaa, Amman and Cairo, with a total of 36 flights during the four-month period. So far, 20 round trips have been operated between Sanaa and Amman, and one round trip between Sanaa and Cairo, all carrying more than 8000 passengers. The Office of the Special Envoy of the Secretary-General of the United Nations to Yemen is studying options to link Sanaa airport to more destinations as part of extending the armistice beyond August 2.

The truce stipulated the entry of 36 fuel ships to Hodeida during the four-month period. For April 2 to July 21, 26 fuel vessels have entered Hodeida port carrying 720,270 metric tons of fuel derivatives. More fuel ships are in the process of being processed. During the whole of 2021, 23 fuel vessels carrying less than 470,000 metric tons entered the port.

“With fuel prices rising globally, it is more important than ever to maintain free flow of fuel to support essential services,” said Mr. Grundberg. The renewal of the armistice would witness the regular entry of oil derivatives ships at the appropriate time.”

He added, “The transition from seven years of war to a state of relative calm will not be without challenges, as there are some shortcomings in the full implementation of the elements of the armistice. However, the truce greatly transformed Yemen and made a tangible difference in people’s lives.

“The Yemeni people and the international community want and look forward to the full implementation, renewal and strengthening of the truce.”

He hoped that the parties would engage constructively in my efforts and realize the potential gains for the Yemeni people from extending the truce and should take advantage of this occasion and not miss the opportunity.