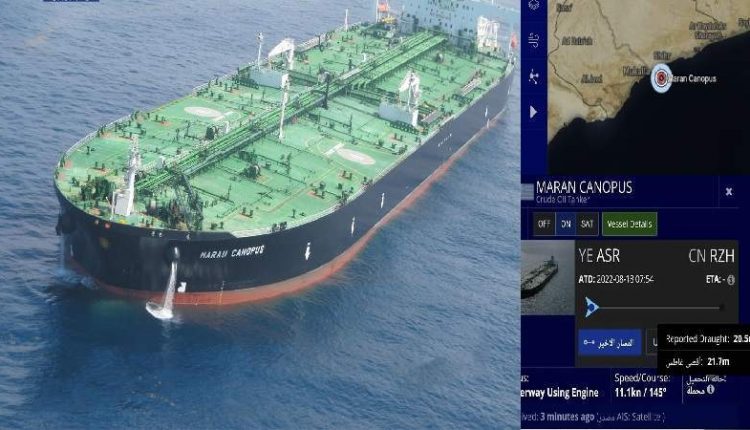 two million barrels of crude oil, with a total value of $200 million, according to stock exchange prices.
The source pointed out that the looting of Yemeni crude oil comes within the series of organized looting by the aggression and its mercenaries of crude oil revenues and Yemen’s wealth, and their continued cutting of state employees’ salaries for more than six years.

According to the navigational websites, this ship is heading to the Chinese port of “Richao” to unload its cargo.

On May. 31, The Ministry of Oil and Minerals revealed the arrival of the giant oil tanker (APOLYTARES ) to the port of Al- Shihr in Hadhramaut governorate in the southeast of the country, coming from China for the second time in two months, with the aim of looting Yemeni crude oil.

A source at the Ministry of Oil told ِAlmasirah that the amount to be looted from the port of Al-Shihr is more than 2 million barrels of crude oil, and cost of the oil looted is estimated at more than 270 million dollars, according to the Brent Crude Exchange.

He pointed out that the looted quantity of Yemeni oil is sufficient to cover the salaries of employees in all parts of the republic for more than two months.

The giant oil tanker APOLYTARES, last April, according to the sources, was expected to carry 2.4 million barrels of looted Yemeni crude oil.

The sources indicated that the cost of the looted oil that the tanker will carry is estimated at more than $165 million.

The oil looted from Bir Ali and Dhaba ports during April and August reached more than $429 million.

On August 15, a source at the Ministry of Oil revealed that the giant oil tanker SARASOTAA has arrived at Bir Ali Port in the Radhum district of Shabwa governorate, coming from South Korea, to steal more than 100,000 tons of Yemeni crude oil.

The source explained that the oil tanker docked with the help of the tugboat (Water Blue), coming from the Emirati port of Fujairah, which has been on the port’s shore since the beginning of the year.

He stressed that the supertanker is preparing to loot approximately 106,000 tons of crude oil and is expected to carry 950,000 barrels of crude oil.

The source indicated that the oil expected to be looted on this tanker is equivalent to $69 million.

He noted that the ports of the occupation areas, such as the port of Al-Dhaba and the port of Bir Ali, are an outlet for the looting of Yemeni crude oil, stressing that only the powerful persons from the tools of the invasion and occupation know the fate of crude oil sales.

Bir Ali Oil Port received on April 12 the giant oil tanker SAGA coming from the Emirati port of Fujairah on the mission of transporting more than 115 thousand tons (approximately one million barrels) of crude oil to be sold for the benefit of the forces of aggression, in continuous looting of Yemen’s wealth.

The organized looting of Yemeni oil comes while Yemenis are suffering from multiple crises as a result of the aggression and the siege, one of which is the interruption of salaries. This looted wealth is enough to cover the salaries of all state employees and more, as confirmed by the recent statistics of the Ministry of Oil.