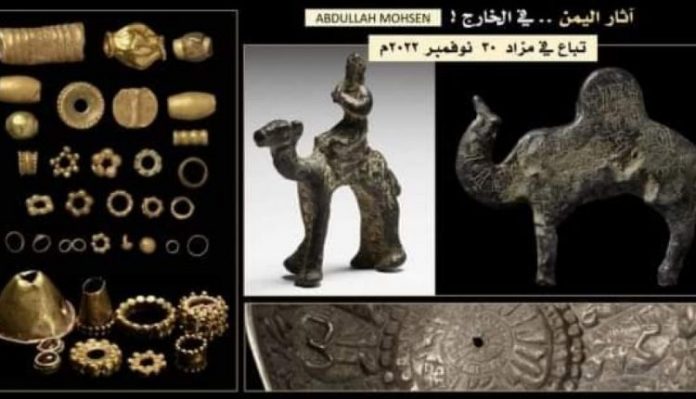 Rare Antiquities From Yemen Are Being Auctioned in London

Saudi-Emirati aggression coalition and its mercenaries and its continue to loot Yemeni antiquities, antiques and manuscripts and invest them in their favor in the American, European and British markets.

The Yemeni researcher specializing in antiquities, Abdullah Mohsen, revealed that more than 40 gold and bronze artifacts from the ancient history of Yemen, stolen and looted by the coalition of aggression and the mercenary government, will be auctioned in the British capital, London, on November 30.

Researcher Mohsen said, in a post on his personal Facebook page, that Timeline Auctions in London will display more than six thousand antiquities from around the world, including (110) Egyptian artifacts, and more than (40) gold and bronze pieces from the antiquities of Yemen, He added that the artifacts were from groups of antiquities dealers from France, Britain, Japan and Israel, most notably Shlomo Musaev.

According to activist and researcher Mohsen, among the exhibits are camels from Yemen made of copper alloys with very complex inscriptions on one side, according to the description of the auction, from the second or third century AD, and weighing (104) grams, acquired by a French group in the eighties, and his picture was sent to One of the best specialists in this type of effects for his study.

Mohsen pointed out that this auction company usually writes the name of the country to which the gold antiquities belong, such as Persia, Iraq and Egypt, except for Yemen, which often lists them under the general name “West Asia Gold”, and Yemen is one of the most prominent countries in this geographical range that has its independent names in the auction without about Yemen.

He pointed out that according to the matching of gold antiquities of this type of unknown state to the Yemeni gold collections in the British Museum, they were found to be identical with them, which confirms that they are from Yemen.