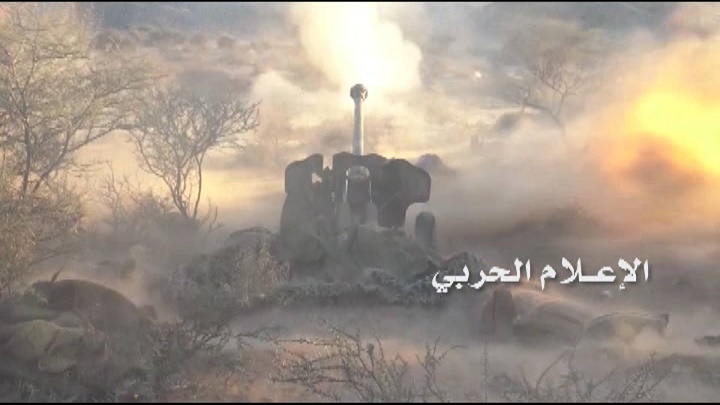 A military official reported that the artillery in Yemeni joint forces targeted gatherings of Saudi soldiers and a leadership center in AL-Rabuah and AL-Masial sites, as well as they broke down a Saudi military tank headed to AL-Masial site with a guided missile in Asir.

The official added that aimed at Saudi soldiers’ gatherings and destroyed a Saudi mechanism in AL-Gawaiah, AL-Dokhan and Kares Jawbah sites sustained direct injuries among them in Jizan.

Reporting to AL-Masirah channel, local agencies said that the artillery of the Yemeni joint forces targeted the Saudi soldiers’ gatherings in AL-Ash site ,AL-Qatrin hill, and Rajla camp ,sustaining them direct injuries and also targeted the Saudi army artillery places behind AL-Shabakh site and Salateh site in AL-Boqa,causing them direct injuries as well; in addition, the snipers shot dead a Saudi soldier behind AL-Shabakh site in Najran.

Mareb was the scene of fierce military operations ; for example, on Tuesday , a Saudi aircraft carrying 12 Saudi soldiers dropped behind Tadween camp and two paid fighters shot dead in AL-Mokhaderah .

Moreover, sites in AL-Nar mountain series freed after the Saudi led coalition trying to take control of it for four days under an intensive aerial and sea supporting; last advances by Sudanese soldiers and paid fighters on AL-Nar mountan eastern Mokha foiled; mass mechanisms by the invaders eastern Mokha destroyed ; hundreds fell dead , including 100 Sudanese paid fighters in freeing AL-Nar mountain series ; a paid fighter sniper shot dead near AL-Shabkah in AL-Jahmaliah and another in Salah; gatherings and fortifications of paid fighters in AL-Mokalkel hill in AL-Jahmaliah , behind AL-Shabkah in AL-Salo and AL-Wakeel hill ; and a storming operation of the Yemeni joint forces on AL-Khazan hill in Hifan ,inflicting them a number of paid fighters fell dead and wounded in Taiz.

The official confirmed that gatherings of paid fighters’ gatherings below Fardat Nehim by Katysha missiles and artillery shelling as a result dead and wounded fell in Nehim.

The official said in a statement that, the Yemeni joint forces raided AL-Hamram hill in AL-Qabidah which resulted in killing and injuring a number of paid fighters in Lahj.

Yemeni forces have been responding to Saudi Arabia’s more than two years of invasion launched in support of a former government. Thousands of civilians have been killed in the war which has also destroyed Yemen’s infrastructure and put the country on the brink of a famine.