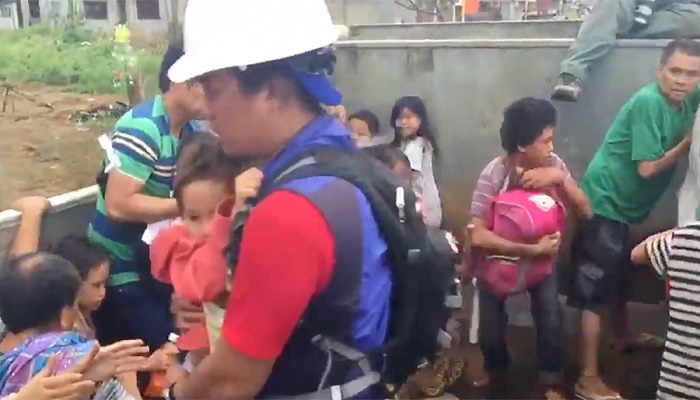 On Jun 5, 2017
224
Share
YemenExtra
A group of Filipino rescuers, nicknamed the Suicide Squad, are risking their lives to save hundreds of civilians trapped in Marawi, which is under the control of Islamic State-linked militants. RT Said that in an exclusively report.

The Suicide Squad have rescued more than 500 civilians in the last two weeks, RT’s Charlotte Dubenskij said, reporting from Marawi, on Mindanao island.

“It started on our first mission when it was very dangerous, when most of our members were shot at when trying to save people,” Saripada Pacasum, a Suicide Squad member, told RT.

He said the group frequently comes under attack from jihadist fighters, who captured the southern city, which has a predominantly Muslim population, in May.

“Shots were fired when we tried rescuing some. There were also shots in our direction, so it’s pretty risky. That’s why every time we step out of the provincial capital to engage in saving people, we are also scared that we might not make it,” Pacasum said.

Attempts to rescue thousands of civilians trapped in the fierce fighting between government troops and Islamist militants failed on Sunday after a temporary four-hour ceasefire, announced to let rescue workers like the Suicide Squad in, was broken after less than an hour.

Heavy gunfire and explosions from artillery shells forced the rescuers to retreat.

The military “did not approve entry into high-risk areas to avoid putting our humanitarians in danger and any possibility that may complicate the situation,” President Rodrigo Duterte’s spokesman, Ernesto Abella, said in a statement.

He said 120 militants had died, along with 38 government forces and 19 civilians believed to be executed by Islamic State (IS, formerly ISIS/ISIL) fighters.

Marawi City Mayor Majul Gandamra told reporters on Sunday morning he expected “more or less 1,000 plus [civilians] to be rescued.”

Only some 170 trapped civilians were rescued on Sunday, however, AFP reported, citing the Filipino military.

According to Reuters, just 134 Marawi residents were freed.

“They shot at us when we were coming here,” she told RT. “The rescuers, they saved us. We were scared… Thank you, because of them we got rescued.”

Late last month, hundreds of Islamist-extremist insurgents from the Maute group – which is affiliated with IS – engaged government forces in firefights in Marawi after attempts to arrest their leader, Isnilon Hapilon. Hapilon, who managed to escape, pledged his allegiance to IS in 2014 and was declared its leader in Southeast Asia last year.

Facebook posts by Marawi residents depicted photos of fighters, clad in black, moving through streets while heavily armed, with local media reporting the Islamic State flag flying over a medical center. Eyewitnesses reported that the Maute group, who are also known as the Islamic State of Lanao, set fire to a jail and a college in the city.

On Saturday, Duterte said government forces could have actually ended the clashes within days had they been less restricted by humanitarian considerations.

“This will be over in about three more days. At a gross…disparity. Many rebels have died. But the government did not fail to do what it was supposed to do,” the president told reporters in the city of Cagayan de Oro on Saturday, as cited by the Philippine Star.

“I could have bombed everything there. I have 10 jets. All I have to do is to bomb the whole place and level it to the ground. But since we are in a civilized society and we are a member of the United Nations and of the Geneva Convention Protocol, I am having difficulties and we had to do it to the least maximum damage of collaterals, especially civilians,” the outspoken Philippine leader said.

Indonesian Defense Minister General Ryamizard Ryacudu the told the IISS Shangri-La Dialogue in Singapore on Sunday that there are about 1,200 IS operatives in the Philippines, around 40 from Indonesia.

Philippine Defense Undersecretary Ricardo David said the 1,200 figure was news to him.

“I really don’t know, my figure is about 250-400, a lot less,” he told reporters, speaking at the same conference.