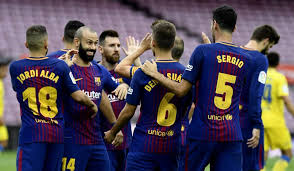 Barcelona Seeks to Get Join an Arab Player!!

Spanish club reports confirmed that Barcelona are watching the star of the Lyon team and the Algerian national team player, Nabil Faqir.

According to the Catalan newspaper “Sport”, the Bulgarians sent a scout to follow Faqir, during the last two games with the French team Lyon.

He is one of the most important players in France at the moment and has scored 10 goals in 14 appearances for Lyon this season.

Faqir and his teammates are taking Lyon to third place in the French league table, behind Paris Saint-Germain and Monaco.

When asked if he wanted to join Barcelona or Real Madrid, he said: “I do not mind going to both.”

Rising Price of fuel in the Gulf States,Indicates for What?

The Naval Forces Warned of Closure the Yemeni Ports