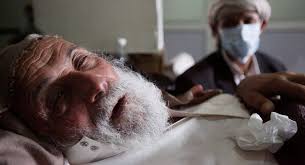 Outbreak Cholera in Yemen is a hideous milestone:ICRC

The explosion of cholera cases in war-torn Yemen is a “hideous milestone”, according to the International Committee of the Red Cross.

The number of suspected cases has now passed the one million mark, making it the worst cholera epidemic on record, the IRC said in a statement.

A desperate shortage of clean water, food and fuel has left health authorities and humanitarian organisations in Yemen powerless to stop the disease. The outbreak of cholera in October last year has killed more than 2,200 people the United Nations said.

The Red Cross said more than 80 per cent of Yemen’s population lacked access to clean water and medicine, largely because of a Saudi-led blockade on aid shipments into the country.