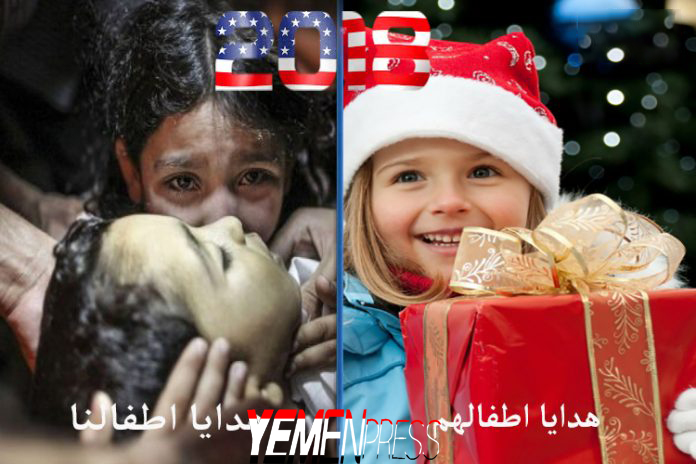 A scenes break the heart, when Saudi Arabia and its allies are being committed the worst crimes in Yemen, and the world prepares to celebrate Christmas and the pacifists take the silence to preserve their interests and positions.

Three years and Saudi Arabia is killing the Yemeni people from children and women and unarmed people with various US-British-French weapons, to see the smile on the faces of their children and women, and the blood of Muslims became cheaper from anything on earth, and also became a means to reach to their ominous goals, and it is a shameful purpose in the history.

Yemeni children: a major human tragedy after one thousand days of aggression

In the time that the world celebrates New Year’s Day 2018, the Muslim Yemeni people are being annihilated by internationally prohibited missiles that manufactured in Jewish factories, and every day the Yemenis die so that the American and European economy can flourish on the expense of Yemeni blood and people that only wants freedom and independence.

On Monday, 25 December, in commemoration of Jesus Christ’s birth, the fighters of the aggression launched a series of barbaric raids on the Yemeni people, which led to the death and wounding of 51 citizens in Aser area in Sana’a, Zabid district, Al-Jarahi district in Hodeidah and the customs building in Dhamar.

This is the reality of 21st century, where made Saudi Arabia a stigma on the forehead of the century and peace advocates in a thousand days were the most harsh on Yemeni children, scenes and images will not be erased from the memory of history.

Houhi calls for broad participation in a protest amid US