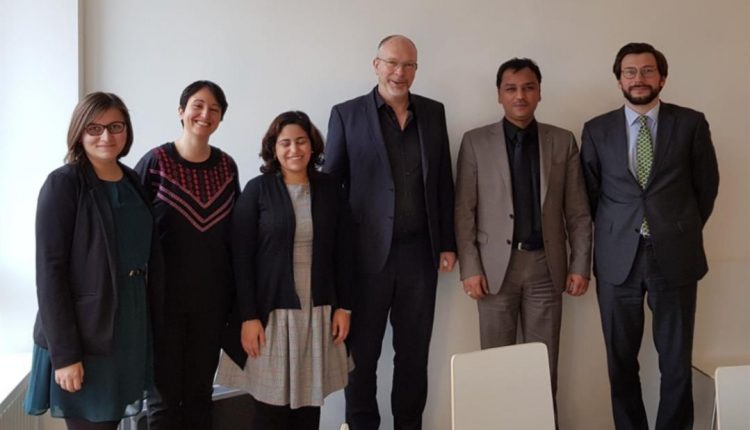 In the framework of his European tour to introduce the southern issue and reveal what the south witnesses of being occupied under the pretext of legalization, the head of the Political Bureau of the Revolutionary Movement, Fadi Baoum, met in Berlin, Germany, met tha Assistant Director of the Middle East Department at the German Foreign Ministry Philippe Reha, and the representative of the Berghof Foundation, Oliver Wells.

Baoum spoke about the general situation in the south and the effects of the war, which exacerbated the economic and humanitarian suffering of the citizens as well as the suffering of the Yemeni who are forced to leave Saudi Arabia, in light of  total blackout of their suffering and the unjust and new laws that were issued to return them to their countries.

He said that the South is witnessing violations of rights and freedoms, pointing out that the citizen “does not dare to claim his right or express his opinion against the new foreign occupier, which imposes its command over land and wealth.” , pointing  out that “the UAE has forgotten that it is a neighbor and sisterwher, but it provided special groups with weapons to terrorize the people of the country and safeguard its interests. “

Baoum is touring a number of EU capitals to discuss a solution to the southern issue as well as the political, economic and humanitarian situation of the south, and  the suffering of immagarited Yemenis in Saudi Arabia.