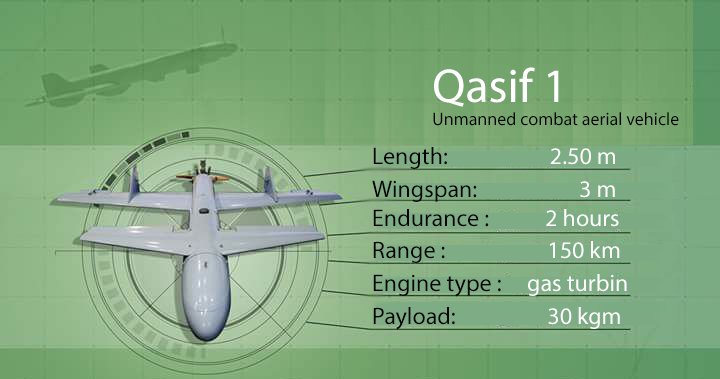 The source added to YemenExtra   in Asir district ,  and Aramco company in Jizan were targeted by drones for the first time, southern Saudi Arabia, making it out of coverage

Qasif-1  drones has a wingspan of three meters and a hull length of 2.5 meters, also has a flight endurance of 120 minutes, and is capable of carrying a payload of 30 kilograms

Hudhud-1 (Hoopoe-1), has a flight endurance of 90 minutes, and an operational radius of up to 30 kilometers. It has a wingspan of 1.9 meters and a hull length of 1.5 meters

The Raqib (Rival) drone can fly as far as 15 kilometers for 90 minutes. It is used in reconnaissance missions and is capable of either storing information or transferring data via online connections

The Rased (Surveyor) unmanned aerial vehicle, which can perform a variety of functions, including aerial monitoring and observation of the battlefield besides geophysical surveying, has a wingspan of 2.2 meters and a hull length of one meter

Within the South of Yemen, Voices Suffering of Occupation