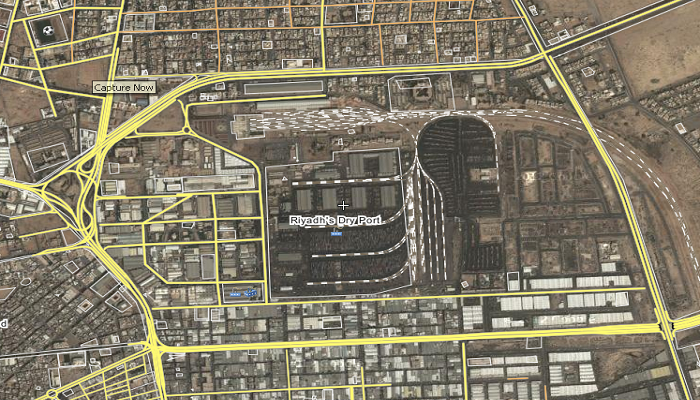 Yemeni Missile Force launched barrages of ballistic missiles – Burcan H 2 (volcano H 2) against Port dry in Riyadh, Capital of Saudi Arabia, and vital economic targets in Riyadh as well, in retaliation of Saudi crimes against civilians in Yemen which last one was Presidency Office crime.

Riyadh Dry Port is a dry port in the city of Riyadh. It is the largest inland port in Saudi Arabia.  The port is located on off Exit 16 in Al Malaz, adjacent to the Riyadh railway station Riyadh Dry Port covers an area of 918,639 m2 and accommodates six 6,480 m2 warehouses.

Earlies, Yemen Air Force have launched a barrage of ballistic Missiles, Burkan (2) –typed, against the Saudi Defense Ministry building in Riyadh, Armco facility and unnamed targets, which comes after one a day from head President of SPC`s speech that revealed an able to fire a barrage of ballistic missiles in a day.

As a part of a national retaliation campaign against the Saudi-led coalition, the Yemeni Air Defense Forces have developed new short-range and long-range ballistic missiles to intensify attacks against vital economic targets and military sites.

Prior to this, the Yemeni Air Force announced they had developed ballistic missiles. One of them, dubbed Qaher 2, is domestically modified with a Soviet SA-2 missile boasting a range of over 300 km. This missile containing a 200 to 400 kg warhead struck a military base, located 966 km south of the Saudi capital, Riyadh, on April 1, 2018, was the first Yemeni rocket reaching to that distance.

Furthermore, Yemeni army has short-range tactic missiles- type Zelzal1/ 2 (Earthquake), Al Sommud, Al Sarkha, 450 of them have been launched against Saudi` and pro-Saudi fighters` vital targets during three years of the ongoing war, according to a close source in the Yemeni army.

On the anniversary of war against Yemen, AbdulMalike Al Houthi, Leader of Houthis who had been running state affairs in the absence of an official administration, vowed to use long-range weaponry and recruit more fighters in a bid to confront the Saudi-led war against Yemen.

“In the fourth year of the war, we will use more developed and more diverse missile systems which will overcome all American and non-American air defense systems to target Saudi Arabia, Houthi said.

It should be note that Yemeni rocket attacks are in retaliation for Saudi-led coalition operations that killed more than 1300 civilian accompanied a land, aerial and naval blockade that drove Yemen into catastrophe, according to Yemen leaders in Sana, confirming these operations will continue to escalate as long as the war and siege continues”.

Saudi Arabia’s bloody war on Yemen has killed and injured over 600,000 civilians, including more than a quarter of a million children, since it’s onset in March 2015.