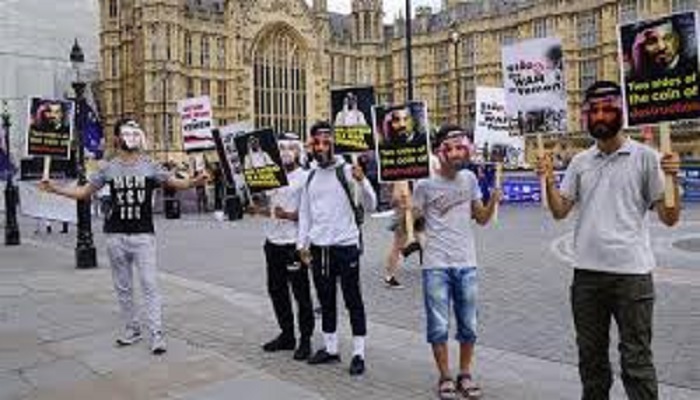 As the Qatari emir visits the UK, a group of activists have staged a protest rally to condemnthe Riyadh regime’s deadly war against impoverished Yemen as well as  the Saudi-led blockade of Qatar

The rally was held on Monday as Qatari Emir Sheikh Tamim bin Hamad al-Thani arrived in the UK capital, London, for talks with British Prime Minister Theresa May and other government officials

The protesters, who were holding anti-Saudi placards, also called on the British government to halt its weapons sales to Riyadh, which has been leading the war against Yemen since 2015

The protest came amid tensions in the Persian Gulf region, which erupted after Saudi Arabia, Bahrain, Egypt and the UAE severed their diplomatic relations with Qatar on June 5 last year, accusing it of sponsoring “terrorism” and destabilizing the region, an allegation strongly denied by Doha

The quartet of boycotters has also barred Qatari aircraft from using their airspace. Qatar’s only land border with Saudi Arabia has also been blocked as a result

The Saudi-led bloc then presented Qatar with a list of demands, among them downgrading ties with Iran, and gave it an ultimatum to comply with them or face consequences

Doha, however, refused to meet the demands and said that they were meant to force the country to surrender its sovereignty

Meanwhile, a report says Extra People, a casting agency for supporting artists, walk-ons, extras and crowd for the movie industry, has been offering actors money to take part in an “anti-Qatar event” outside Downing Street during a meeting between May and Sheikh Tamim

The UK-based independent media corporation has offered £20 per person to participate in the protest from 11 a.m. local until 12.30 p.m. on Tuesday, just before Sheikh Tamim’s arrival

The agency said it was “contacted by an individual” to “source people” for the event, but refused to reveal the identity of the client

“The company is looking for a large group of people to fill space outside Downing Street during the visit of the president of Quatar (sic). This is an ANTI-Qatar event – You will not have to do or say anything, they just want to fill space. You will be finished at 12:30,” the casting agency said in an email to its actors

At 8.15 p.m., shortly after media reports first began to circulate about the job offer, Extra People sent another mass email to its extras saying “on reflection” it would not be involved “in such a project

US appeals court upholds right to carry gun in public