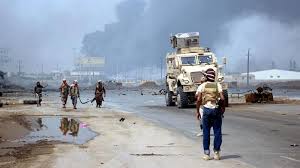 Report: Pentagon officials planned out the Saudi-led offensive on Hodeidah

Pentagon officials have been involved in planning the new Saudi-led attack on Hodeidah, the Intelligence Online news website said on Thursday.

The Pentagon provided Saudi Arabia and the UAE vital information to launch a vast offensive on Hodeidah port city, the site said.

Pentagon officials met in the Saudi capital of Riyadh with Saudi and Emirati officers to negotiate and plan out the attack on Yemen’s Hodeidah.

“Washington handed over two more surveillance and spy planes to Riyadh before the attack on Hodeidah,” the website said.

This comes in the context of the policy of the coalition carried out by the Saudi regime and the Emirates and alongside with the US against the people of Hodeidah and the destruction of their property amid international disregarding of the assault that could endanger the lives of millions in Yemen.

Last Friday, a statement was released by the puppet government of Yemen, which is operating from one of the hotels within Saudi Arabia, that they have begun a vast offensive on the port city of Hodeidah, located on the west of Yemen, in an attempt to take control of the province.

However, the large offensive has accomplished nothing but the killing of civilians and destroying vital infrastructure, latest of which was the complete destruction of the Red Sea mills silo, which were reopened in 2016 after having undergone expansions, updates and development in machinery, equipment and the ability for a daily production, producing the equivalent of 2,000 tons per day of white flour.

The report came on the same day that a girl lost her life and nine other civilians lost their lives when Saudi artillery and mortar shells rained down on the 7th of July neighborhood in Hudaydah city, destroying one of the civilian’s homes and damaging dozens of others.

If Saudi Arabia along with its allies and militias on the ground don’t halt the attacks on Hodeidah, more than 600,000 thousands of vulnerable civilians in Hodeidah, half are children, will suffer and being on at risk of cholera and malnutrition.

The port of the city is very essential for civilians, where more than %80 of humanitarian aid, food and fuel goes through, so if it gets damaged or stopped working, the UN may declare famine in the country, despite the fact that Saudi-led coalition vast offensive has resulted already in the stop of aid from leaving Hodeidah, endangering 14 million starving Yemenis.

According to a new report by the Armed Conflict Location and Event Data Project (ACLED), a nonprofit conflict-research organization, the Saudi-led war has so far claimed the lives of around 56,000 Yemenis.

A number of Western countries, the US and Britain in particular, are also accused of being complicit in the ongoing war as they supply the Riyadh regime with advanced weapons and military equipment as well as logistical and intelligence assistance.

In earlier reports, Human Rights Watch said that raids by Saudi-led coalition forces had bombed factories, warehouses and other civilian economic facilities in Yemen. In the absence of credible and impartial investigations in Yemen, Saudi Arabia and the rest of the coalition must agree to conduct an independent international investigation into these and other attacks.

“It seems that repeated air strikes on civilian factories are aimed at harming Yemen’s already collapsed economy for a long time to come”, HRW said in a statement.

“The escalation in Hodeidah is not a liberation or a restoration of the province, but an extension of the obsession of control and acquisition and the occupation of Yemen by a coalition that has gone so far as to exterminate the Yemeni people and destroy the geography,” Karman said in her Facebook page, calling on the Security Council to issue a decision to immediately stop the battle in Hodeidah.

The Saudi-led coalition committed multiple crime against the civilians of Yemen, where it has escalated its aerial and ground bombardment after the US has called for peace talks within the next month in Sweden, led by the United Nations. However, reports say that Saudi-UAE coalition is not serious to achieve peace, mainly because they have taken control of vital regions within Yemen and that is why they have escalated the fightings in most of the frontlines, particularly in the west coast of Yemen, near the portal city of Hodeidah.