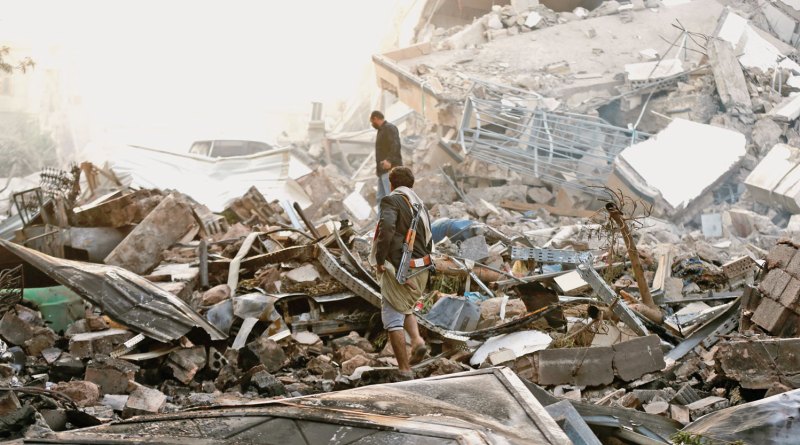 OHCHR calls for the ending of the military escalation on Hodeidah, Yemen welcomes

The Foreign Minister also welcomed the call by the United Nations High Commissioner for Human Rights (OHCHR) upon the Saudi-led coalition to immediately remove the restrictions and creating a safe and rapid path for the entry of indispensable humanitarian supplies and other goods, recalling the obligation of all States to take measures to ensure respect for the Geneva Conventions by the parties participating in the conflict to establish conditions or limit or prevent the transfer of arms to clashing zones.

The minister renewed the invitation of Bashlit to visit Yemen to fully understand the truth about who is behind the brutal crimes against the Yemeni people, who are with no doubt are being committed by the countries participating in the Saudi-led coalition that has been going on for nearly four years.

The foreign minister said in a statement to Saba news agency that the military escalation in Hodeidah by the Saudi coalition will lead to a major humanitarian disaster and undermine the peace efforts of the Special Envoy of the Secretary-General of the United Nations to Yemen.

He affirmed the Republic of Yemen’s commitment to the protection and promotion of human rights, respect for the international humanitarian law.

The Foreign Minister reiterated the readiness of the National Salvation Government to participate in peace talks under the auspices of the United Nations to achieve a just and honorable peace, which preserves the unity of Yemen and the sovereignty, independence, and territorial integrity.

Minister Sharaf again called for the formation of an independent international commission of inquiry to investigate violations and crimes committed against the people of Yemen, end impunity and bring justice to the victims.

Many people around the globe have raised demonstrations to condemn the Saudi war on Yemen, latest of which was in Brussels, where more than a hundred Yemeni citizens living there participated in the demonstration and chanted slogans against Saudi Arabia and the Arab coalition, carrying  photos of victims of Yemen’s war called for a cessation of the war.

United Nations High Commissioner for Refugees (UNHCR) had previously announced since June nearly half a million Yemenis have been forced to leave their homes in Hodeidah.

Earlier this year in a report to the UN Security Council, Mark Lowcock, United Nations Under-Secretary-General for Humanitarian Affairs warned that Yemen is on the brink of famine.

The United Nations has also warned that more than three million people are at risk of hunger due to the depreciation of the Yemeni Rial.

Since March 2015, a coalition of several Arab countries led by Saudi Arabia and the go-ahead and assistance from the United States launched assaults on impoverished Yemen under the pretext of restoring power to the ousted Riyadh-friendly president Mansour Hadi.

Over the past three and a half years, the Saudi incursion has claimed the lives of thousands of innocent people, displacing a million others and razing the Arab nation to the ground.