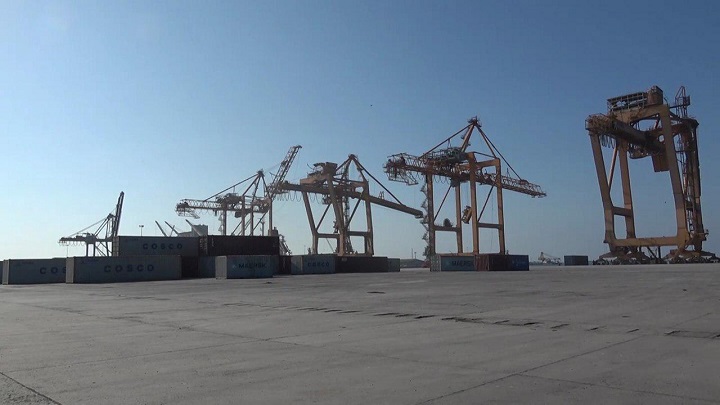 Numerous Condemnations of Coalition Attack on the Port of Hodeidah

The condemnations over the US-backed Saudi-led coalition have expanded for its targeting of the seaport of Hodeidah, which is considered to be the lifeline of millions of Yemenis.

An official from the Foreign Ministry condemned in the strongest terms the targeting with two aerial Saudi raids on the eastern gate of the port of Hodeidah. The official added in a statement that the port of Hodeidah is a lifeline for over 24 million Yemenis, where it receives 80% of humanitarian aid, medicines and commercial goods.

The source stressed that the countries participating in the coalition led by Saudi Arabia disregard all kinds of international calls urging for a halt of the de-escalation on the city of Hodeidah and crossing all the red lines by targeting its port.

Various kinds of political parties who oppose the Saudi coalition also condemned the ongoing military escalation by the US-backed Saudi-UAE coalition, which extended to literally attack the only operating port in Hodeidah, which is the main source for medicine and food to more than 25 million people who are trying to live under a siege and war that has targeted all sorts of life in Yemen.

The parties called on the UN and the Security Council to speed up the deterrent decision against the countries participating in the war with an immediate halt to the brutal war against the Yemeni people and take the necessary measures to open land, sea and airports.

The Ministry of Human Rights condemned the Saudi crime that targeted the port of Hodeidah, considering it a terrorist act that is stripped of all human meanings.

The National Authority for the Management and Coordination of Humanitarian Affairs condemned the criminal act carried out by the Coalition by targeting the eastern area of Hodeidah port, where trucks used for transporting food and medicine enter and leave from.

In addition, the civil bloc for development and freedoms denounced the Saudi-UAE attack on the port of Hodeidah, stressing that such targeting is a war crime full-fledged.

The student unit also condemned the deliberate bombardment of the port of Hodeidah by two aerial missiles, putting on the United Nations, international organizations and the Saudi-led coalition the full responsibility for this heinous act and its disastrous consequences.

The Sada al-Ahdath establishment for media and development condemned the deliberate bombing with two aerial Saudi raids on the port of Hodeidah, which resulted in injuries among workers and employees of the port and aimed at destroying the infrastructure of the port.

The leadership of the province of Hajjah and the local authority in the province of al-Jawf expressed their outrage against the targeting of the port of Hodeidah by the coalition, which is considered to be the only outlet for the entry of food and medicine for the Yemeni people.

Tuhamah Organization for Human Rights and Heritage condemned the bombing of the port of Hodeidah by the Saudi-Arabia alongside with countries participating in the joint Saudi-led coalition Air Force, which resulted in the disruption of the port’s work and injuries to civilians and aimed at disrupting humanitarian relief work.

The organization stressed that the killing and committing genocide against civilians in Hodeidah has become a daily practice in the framework of indiscriminate attacks of the Saudi-UAE coalition by various kinds of weapons launched from land, sea, and air.

Moreover, the organization expressed its denunciation against the UN and its bodies for not bringing any attention to the crimes committed by the coalition, which proves that the calls of America, Britain and France are misleading calls, where they’re plan is not to reach peace but to escalate the destructive war in Yemen; thus, worsening the humanitarian situation which is already catastrophic.

To conclude, the organization called for urgent humanitarian relief to save civilians and stop the hostility, calling on the international community, the UN Security Council and the Human Rights Council to immediately stop the brutal fight carried out by the Saudi-UAE coalition in the province of Hodeidah in particular and Yemen in general.