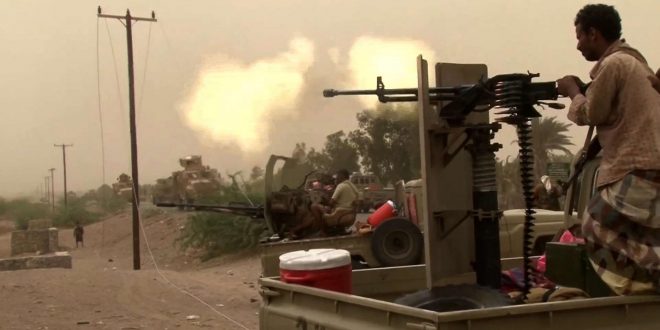 The rival sides of the war in Yemen have finally moved a step closer to peace as they have launched negotiations under the auspices of the UN in Sweden after hard efforts carried by the special envoy to Yemen Marin Griffith. Nevertheless, there is a major risk of the failure of achieving peace in Yemen due to the Saudi-led coalition hostilities on Yemeni ground and its brutal aerial campaign, which it has escalated since both warring parties met on Thursday for a press conference.

Four fishermen were killed as they were targeted by the coalition warplanes while they were fishing on their fishing boat off the Haroniah coast in the district of Munirah, Hodeidah governorate, an official source reported.

The Ministry of Human Rights warned the coalition forces for continuing their aggressive attacks against the Yemeni people and vital institutions, which is aimed at derailing the peace consultations currently underway in Sweden, according to a ministry statement.

The statement called on the international community “to intervene quickly to stop the aggressive attacks against Yemen in order to save the peace talks that are currently rolling for establishing a comprehensive political solution that will end the conflict and achieve security, stability, and peace.

The statement by the Ministry of Human Rights pointed out to the escalation of the coalition, led by Saudi Arabia, in the coastal province of Hodeidah, where it has committed horrific crimes by targeting civilians, especially children and women, in the districts of al-Durayhmi Tuhita, in addition to the July-7 neighborhood, Hodeidah governorate.

In the last 72 hours, more than 60 air raids had targeted several areas in the coastal province of Hodeidah, an official source reported.

Moreover, the ministry has specifically given the responsibility to the Security and Human Rights Councils, to stop the escalation and support the efforts achieved by the UN envoy to Yemen so the bloodshed of the Yemeni people could end and create peace, and most importantly to end the Saudi imposed siege on more than 22 million Yemenis who do not know when and from where their next meal they will get.

Brigadier General Yahya Saree, the spokesman of the Yemeni army, said that the coalition has not stopped hostilities, but even escalated its offensive operations in various fronts, which shows that the coalition is not seeking for peace and is trying to advance by taking advantage of Yemen peace talks held in Sweden.

On Friday, the official senior spokesman released a statement in which he said that on during this day, the coalition warplanes launched 19 air raids on different fronts within Yemen. He stressed that Saudi mercenaries on the ground are still launching rockets and artillery shells, in conjunction with backing the frontlines with more soldiers and carrying offensive operations against the Yemeni army.

He pointed out that residential areas in the coastal province of Hodeidah were subjected to extensive shelling, which targeted the district of Tuhita and al-Durayhmi in the governorate.

In addition, he went on saying that all of the operations were foiled by the army, in which more than 7 armored vehicles were destroyed by landmines and dozens from their ranks were killed, 25 injured in Nehm, while 14 mercenaries affiliated with the Saudi-led coalition were killed or injured during an offensive operation as they entered a minefield in the district of al-Baydah.

Bridger general Saree said there were other offensive operations, but all of the attempts were confronted by the Yemeni army in support of volunteers from the popular committees.

The war and siege on the impoverished state for nearly 4 years now has put Yemenis on the brink of famine, and developed diseases and epidemics that have killed thousands, the majority of them were children and elderly. Additionally, there are More than 7 million employees have not gotten their salaries for more than two years.

The Saudi large offensive against the port city of Hodeidah, which is the lifeline for millions of Yemenis got the attention of the world’s biggest humanitarian organizations nationwide, for its port that serves more than 23 million people and several other infrastructures million of Yemenis depend upon, not to forget to mention that the city has a population of more than 4 million Yemenis; thus, any attack that will endanger Hodeidah will highly escalate the humanitarian crisis in the country, which according to the UN, 14 million Yemenis will be endangered of being on the verge of famine.